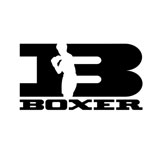 In 2009 we will work hard on the label to serve you some nice surprises & great music. And by the way. KICKBOXER will move your ass too. The fantastic cover art is done by oli flunke from "the pixelz"!