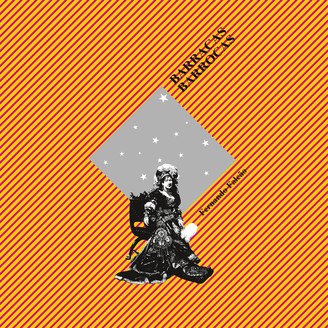 Play All LP
Selva Discos fulfills its duty of giving a new life to Fernando Falcão's long lost LPs with the reissue of his album Barracas Barrocas, originally released through Egberto Gismonti's cult record label Carmo in 1987. Somehow, an original copy of this album is even more elusive than its predecessor Memória das Águas and it is a pity that such a stunning piece of music was kept apart from listeners worldwide for so long.

The follow-up to Memória das Águas was recorded in São Paulo after Fernando Falcão returned from his exile in France in 1984. In order to conceive Barracas Barrocas, the musician had the help of illustrious friends, such as singer-songwriter Alceu Valença and singer Tetê Espíndola, alongside brothers Myriam and Daniel Taubkin. At the time, Falcão was still using the sound sculptures he created for Memória das Águas, as he is credited in the liner notes for playing a "water orchestra" and his berimbau variant called balauê.

Barracas Barrocas is an album that works as a more condensed and coherent artistic statement of Falcão's œuvre. Lush strings, swelling brass, glowing production, and humming atmospheres fill the record, adding a beautiful yet subtly linked counterpoint to his previously explosive debut. It is very cinematic, sounding like the soundtrack of a play that only existed in the musician's mind.

For this release, not only the sound was remastered but the artwork of Barracas Barrocas was completely and faithfully restored. Also, the reissue comes with unprecedented liner notes featuring rare photos of the musician and his sound sculptures plus an article that tells the story of Fernando Falcão after returning to Brazil following his exile – a story that has never been told, until now.