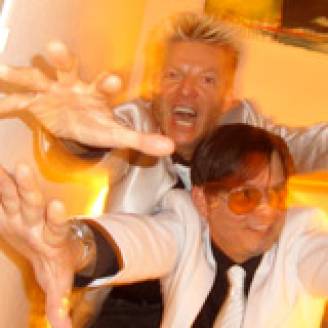 To detail the immense history that these two fellows; Jörg Burger and Wolfgang Voigt who make up the act BURGER/VOIGT bring to the table would be absolutely impossible on a single page. Contemplating 2 decades of their music and their tremendous contributions (as a duo and individually) to the techno community over the years, makes this writer feel a book is more deserving. But let’s dive in by giving you a glimpse into one of the most important moments of techno history and why their return to the studio and stage heralds an opportunity not only for a new generation to hear the foundation of what built the sound and philosophy of what KOMPAKT is today but also why their return ushers a new era for Cologne techno.

As a musician, Wolfgang Voigt is better known under the endless pseudonyms – be it his more famous alias as MIKE INK, LOVE INC, M:I:5, STUDIO1, or GAS he set the tone of trend in the early-mid ‘90’s for creating total anonymity in techno music. Credited for literally kicking off the German acid revival during 1991-1992 as MIKE INK with the single “Dialogue” (Trance Atlantic) he went on to refine a new sound of acid techno by matching the classic approach at time to techno with German folklore-ish rhythmic patterns and sounds (eg. Shuffle) thus liberating German techno from cloning what was happening in the United States at that time.

As well, Jörg Burger is a figurehead in the German techno scene. Musically rather than embracing Voigt’s more rigid, experimental approaches to dance music, Burger managed to use his vast knowledge of pop history and create an equally genuine approach to rhythm and melodic minimalism in techno – hence the birth of THE MODERNIST, his most famous alias to date. But Burger had two musical hearts beating in his breast, as THE BIONAUT he brought a different perspective to the new-found intelligent techno popularized by labels as Warp in the early-mid ‘90’s. His unique compositions, including elements of Indiepop, Folk and Country found new horizons and paved the way for what was later called Indietronics. Apart from doing his own Labels Eat Raw and The Popular Organization for Sony Music, he took part in the relaunch of the legendary HARVEST Label on EMI and was responsible for many of its releases in the second half of the nineties, among them classics such as the highly acclaimed Lush Life Electronica as The Bionaut and The Modernist´s Opportunity Knox.

So how did they come together? It’s amazing to think that they met as near-infants in the early ‘80’s whilst playing in different bands at a jam space…they immediately began to record together, sharing their enthusiasm for classic indie pop from bands like Scritti Politti, The Smiths and Aztec Camera. By the late-‘80’s they’d gravitated to the sound of Chicago’s acid techno movement. 1991 brought forth their first label, Trance Atlantic. But it was in 1993 that they helped found the Cologne techno community found it’s first hub – the DELIRIUM record store…a shop that together with Jürgen Paape, Michael Mayer, Reinhard Voigt would help kick start a sound and movement in German dance music like no other finally becoming KOMPAKT.

BURGER/INK made their debut together with the HARVEST release of the long player “Las Vegas” in 1996 (1997 in the USA via the indie powerhouse MATADOR). Many will still recall this time as when the music industry and media proclaimed ‘electronica broke’ – mainstream hype crossed over into bringing forward The Chemical Brothers, Daft Punk, Fat Boy Slim outside of the clubs and to the general public’s ears. When “Las Vegas” came state-side the reaction was enormous and caused ripples globally bringing attention to ‘The Sound Of Cologne’ as a new and exciting movement in musical history,. BURGER/INK’s deft combination of pop and repetition remains a definitive moment for opening America’s doors to ‘90’s German techno and has gone on to influence countless dance producers and even rock bands.

And then there was silence…well, not quite as Burger became preoccupied with touring and his own successes as The Modernist and other guises. On Voigt’s side 1998 was a landmark year – together with Reinhard Voigt, Jürgen Paape and Michael Mayer they launched KOMPAKT. Voigt, already bored of touring, found himself more challenged and focused on developing the company and remains to this day as the central figure behind the scenes of KOMPAKT.

This brings us to August 17, 2007 – KOMPAKT’s annual celebration TOTAL 8 brought the renamed duo, now BURGER/VOIGT on stage for the first time ever, rolling through an electrifying live set of floor raising new songs and revamped classics. Motivated by the massive response, a new single, remixes AND a forthcoming studio album, BURGER/VOIGT show no slowing down. After recent other select shows they are finally ready to hit the road – don’t miss this extremely rare opportunity to witness the fitness.