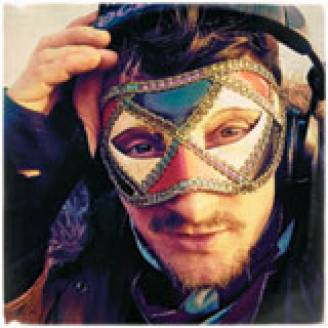 Stefan Kozalla aka DJ Koze lives and works in Hamburg and Cadaqués. His Profession: DJ, Musician (International PONY, Adolf Noise) and Remixer for many, including Gorillaz, Moderat, Matthew Dear, Låpsley, Caribou, Who Made Who, Lawrence and many others.

DJ Koze exists a little outside of time of time. Not only because his records can take you to places where everything seems to stop, the present moment expanding out to the horizon, but because he manages to function on a timeline completely detached from the usual dreary cycles of hype, influence, club hits, press credibility and career progression that govern so many of the structures of the music world. None of which is to say, though, that he's a wilful “outsider” artist: though Koze's music has been consistently strange and psychedelic, he has absolutely no truck with courting obscurity or alienating people for the sake of it, and he is hugely popular with very good reason.

Stefan Kozalla was born in Marrakech but his itinerant family eventually settled in the very northernmost reaches of Germany by the Danish border, in time for Stefan to gravitate to the music scene of nearby Hamburg. By the age of 16, in 1988, he was already insanely skilled as a cutting-and-scratching DJ, coming second in the DMC mixing championships. He joined local hip hop crew Fischmob, committing his first release to vinyl with them in 1994, and made his first solo releases later in the 90s as Adolf Noise. Even back here, there was nothing conventional about anything he did, nothing that he did fit into any trend or sub-genre of the time – yet it kep reaching new ears as people picked up on the unique frequencies he was accessing and quickly ran to share them with his friends. Likewise when he formed electronic pop band International Pony around the turn of the millennium – signing to a major label for two albums: though their influences and quirky humour might have invited comparisons with acts from the then-dominant electroclash scene, in fact their records sounded (and still sound) utterly unique, existing in a world all of their own.

His identity on the dance scene as DJ Koze was also becoming well established by this point. He was first voted SPEX magazine's number one most popular DJ in 1999, and would hold that honour for NINE years. He also began a relationship with Frankfurt's Kompakt label around this time, his releases beginning with September 2003's "Der Säger Von St. Georg" (a track on the Speicher 11 EP) and a three-track 12" titled The Geklöppel Continues. The following month, he recorded his second commercially released mix, All People Is My Friends, which was released on Kompakt the following January. From here his flow of tracks was steady, punctuated occasionally with thrilling albums, all of which still stand the test of time: Adolf Noise's Wo Die Rammelwolle Fliegt (Buback, 2005), DJ Koze Kosi Comes Around (Kompakt, 2005) and, on his own Pampa label, Amygdala (2013). Reincarnations: The Remix Chapter 2001-2009 (Get Physical) and Reincarnations: The Remix Chapter 2009-2014 (Pampa) collected his considerable, often spellbinding, remix work – this being the arena in which he would first demonstrate his true capabilities in terms of stylistic breadth.

As the 2010s progressed, his productions, and the releases by others that he selected for Pampa, paradoxically placed him right at the heart of the dance establishment, even as each one undermined or rewrote the rules of what a dance track is. His 2012 remix of Matthew Herbert's “It's Only” was made Resident Advisor #1 Track of the year the following year. In 2014 his reworking of Moderat's “Bad Kingdom” was inescapable – and in 2015, his track “XTC”, with its pitched-down, deeply philosophical alternative take on drug musings, became one of the most peculiar tracks ever to achieve club anthem status. In 2016, his remix of Lapsley's “Operator” was nominated for best remix & best record at the Electronic Music Awards, LA ), and in 2017, his heartbreakingly gorgeous remix for his old Kompakt compadre Michael Mayer's track “For You” with Joe Goddard again achieved ubiquitous status. And that's just a very few choice tracks: plenty of electronic music heads would pick other tracks as favourites, or cite the importance of his remixes for Caribou, Mount Kimbie, Apparat, Lapsley, Matthew Dear, Whomadewho, Gonzales, Battles, Soap&Skin, Mathias Aguayo, Ben Watt, Hildegard Knef or any of a huge number of other luminaries.

And there's more besides. In 2015, Koze had the honor of compiling the 50th installment of !K7's celebrated DJ-Kicks series, which he used as an opportunity to remind us of his love for leftfield hip-hop and pop as well as house: exactly the kind of variety he's brought to bear on knock knock. The following year, he presented Pampa, Vol. 1, an unmixed selection of exclusives sent by his good friends who also happen to represent a who's who of underground talent: Acid Pauli, Gold Panda, Mount Kimbie, Roman Flügel, Ada, Stimmung, Dntel, Isolée – and the small matter of a collaboration between DJ Koze & Jamie XX. Rather remarkably, and showing that no matter how peculiar his music gets, the more momentum Koze builds, the second Reincarnations set, the DJ-Kicks mix, and Pampa, Vol. 1 all placed on Billboard's Dance/Electronic Albums chart in the U.S. Almost a quarter century from his first release, in his own words, Koze “keeps delivering like a pizza boy.” Even in a world flooded by cheap copies and functional clubs, his remixing skills are some of the most in-demand in the world, the Pampa label is one of the most important in electronic music, and his DJ sets are revered worldwide to this day... and as knock knock! shows without question, he is still a world-bestriding music artist in his own right. Outside of time, outside of obvious influence, outside of trend and hype – but right inside a circle of great “artists with gifted talents... somewhere on the edge of pop music” – DJ Koze just keeps on keeping on.