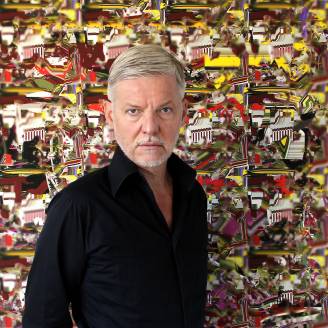 Wolfgang Voigt, born in 1961 in Cologne, Germany, is an artist, music producer, label owner and one of the co-founders of the Cologne-based electronica and techno label Kompakt.

His project GAS, an intoxicatingly sinister work of sound art based on highly condensed classical sound sources, thrills a global audience far beyond the traditional electronica and techno music scenes since over 20 years. By combining abstract nature sounds with strings and brass alongside GAS’s minimalist cover designs incorporating photographs he took in the forest, Voigt shows his strong affinity for Romanticism and portrays the forest as a mysterious or melancholic place. GAS fantasizes about a sound body ranging somewhere between Schönberg and Kraftwerk, between bugle and bass drum. GAS is Wagner in the guise of glam rock, Hansel and Gretel on acid. An endless march through the undergrowth—into the disco—of an imaginary, misty forest. In 2017, GAS made its long-awaited return with the release of fifth full-length Narkopop. The album had a much more organic, almost orchestral sound than the project's prior, loop-based output. Already one year later the 6th GAS album Rausch followed, an hypnotic trip that is meant to be heard from beginning to end as a whole.

With his "comeback" in 2017 Wolfgang Voigt also restarted GAS live. The breathtaking audio-visual performance has since then enchanted GAS followers worldwide and has sold out places like The Art Institue of Chicago or The Barbican in London.