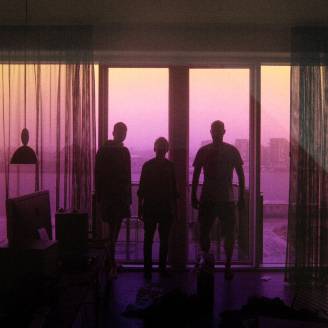 Jatoma are all about the unknown and though they are new amongst us they remain cloaked in paradoxes and already questioned by many. Some think that one of the members is a famed producer amongst 2 genius teenagers. Others project they are a side act for a band held in the highest regard. Some will speculate they are just trying to get more attention by remaining unknown. The facts remain blurry and ambiguous but there remains an clear authenticity surrounding these factors – Jatoma are clearly one of 2010’s most inventive new acts our ears have had the pleasure to hear and it’s with our excitement we welcome them to Kompakt. So enter their self-titled debut full length – “Jatoma”. Brought upon an impromptu live jam session one cold weekend in January 2010, Michael Mayer at Kompakt was immediately drawn to their combination of the synthetic and the futuristic. So seek out the found yourself. Find the sounds of cutting carrots and cereal pouring into a bowl as they conjoin with the music of humanity such as handclaps and vocals together united with drums, guitars and electronics. The first track (and lead off single) “Little House Boat” flickers and modulates in a waterfall of harmonious oscillation. These sounds that are as hard to place as the members names and set a strong overall tone for this album which is Jatoma’s bubbling brook. The momentum of an acoustic 4/4 kick drum drives us through a blissful “Manipurma”, “Durian” has a groovy house momentum that chimes with the keys of a child’s imagination. “Bou” is a dance floor rollout that straddles the best of James Holden’s creative zeal and their apparent love for the subversive. Ambient crooners like “Permafrost” and “Ma10as” leave us washed to the shore gasping for breath only then to be submerged again by the unfathomable finale Luvdisc…or is it?