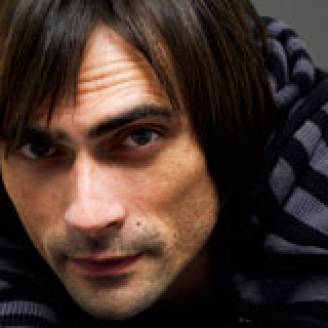 “Normally, I produce my music during the night therefore you should listen to it during the night” (Groove Magazine 111). Jens Zimmermann`s creed is clear:
He feels most comfortable when the light is off, the fog-machine is rolling and he is able to generate his personal microcosm in order to stimulate the crowd euphorically.
Jens Zimmermann`s music can be categorized in the “Minimal-Section,” but with his very own interpretation. His organic productions with reduced and heavy-bass nature are up to date without neglecting his roots which are shaped by the intensity and the roughness of the early 90`s. The unique tension between tightness and experimental pleasure on the one hand, energy and functionality on the other hand nearly puts a spiritual aura on his tracks. Zimmermann`s catechism also appears in his DJ-Sets implementing a large amount of his own productions which makes every set special. He has a mania for endless transitions, works with self-produced loops and chooses the right effect for the right time. Unique releases on labels like Snork Enterprises, International Freakshow or Kompakt, exactly mirrors Zimmermann`s philosophy of “The non-resisting groove which has to be pumping”. Moreover his sound is highly regarded by contemporary artists like Ricardo Villalobos and Richie Hawtin.
Ever since, Jens Zimmermann has developed a high interest in all sorts of technique. During his youth he modified a polygraph to be able to listen to his friends’ brain-waves.
At the age of twelve he discovered his biggest passion – the DJing!
In combination with his ground breaking experience gained at “Dorian Gray”, a former club in Frankfurt, he fell in love with electronic music. In the beginning of the 90`s, Zimmermann started to produce Techno and his release, “Running” on the label “Abfahrt” as a member of the project “Tyrell Corp,” became a hit in the underground-scene. Later, he switched from Techno to Drum `n` Bass, a valuable time showing him the right handling of Dubplates and “pure” electronic signals.
Inspired by the direct and straight nature of pulsating grooves and bassdrums, Jens Zimmermann has returned full of passion and ideals to his old love “Techno” - confirmed by a release on the label “Room Recordings” in 2005. Moreover you can find his tracks in recent compilations courtesy of the Londoner Fabric and Frankfurter Cocoon Club - a fact proving that the “Sound-Scientist” has an influential impact on the scene.
Jens Zimmermann loves to be independent and doesn`t want to make compromises in the field of art. Steady development is his propulsion!