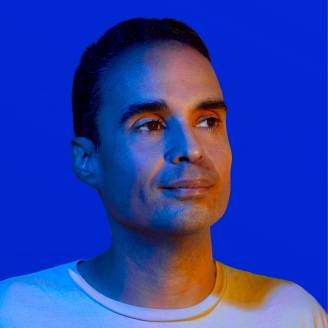 With both his parents being professional classical musicians, it might not be a surprise that John Tejada has become known as one of the most prolific and consistent producers in today’s eletronic music landscape. Trained on drums and the piano from an early age, the LA-based synth mastermind has since amassed his own impressive skill set, embracing the music as a personal frontier, expanding on his resume as a techno recording artist as producer, remixer, DJ, and label owner. Known for crafting a brand of subtle, musical sonics, his recorded output ranges across tempo and genre lines, from chilled out affairs with spacious arrangements to pulsating, densely layered, deeply energetic tracks that work magnificently in the hands of DJs as well as on the home stereo.

Before hooking up with Kompakt, the much-acclaimed studio wizard had already made his own dent in the musical universe, thanks to a flurry of top-tier releases on labels such as Steve Bug’s Pokerflat Recordings, the legendary Plug Research imprint, 7th City, R&S and many more - but nothing prepared the world for those exquisite bangers „Sweat On The Walls“ and „Mono On Mono“, both released in 2004, with the latter being one of the most fervently beloved classics on John’s own label Palette Recordings. It’s here that John has continuously honed his skills, together with friends and long-time collaborators like Arian Leviste, Justin Maxwell or classical jazz guitarist Takeshi Nishimoto (as band project I’m Not A Gun).

Besides his work in the trenches of modules, patches and other things spelled synth, John has developed some serious DJ acumen over the years - travelling around the globe to light up renowned clubs and festivals such asMovement (the event formerly known as the Detroit Electronic Music Festival), Sonar Festival (both the Spain and Tokyo instalments), Dance Valley (Netherlands), Sync Festival (Greece), Mutek Mexico, Fabric (London), Yellow (Tokyo), Rex Club (Paris), The Walt Disney Concert Hall (Los Angeles) and many, many more. It’s somewhat admirable, then, that the man still finds time for his studio explorations - but the quality of the releases he has unleashed upon Kompakt alone (including brilliant full-length offerings and a couple of much-liked 12“es) bears witness to the musical genius that is John Tejada.