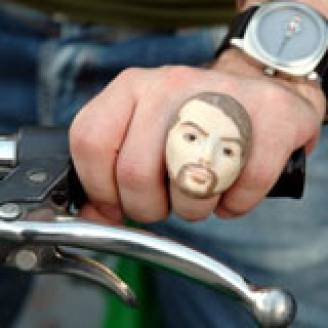 A child's nursery features not a tin drum but two turntables including a mixer, the occupant is most certainly not preparing for some kind of folkloristic brass band event in his contemplative Bavarian hometown of Regensburg…

The specialised press calls Markus Guentner -- who is a renowned minimal and ambient musician as well as a DJ – the “inventor of pop ambient”. for quite a while he’s been creating his tracks in his home town of Regensburg – but they are now equally popular with Cologne label Kompakt and Mathias Schaffhaeuser’s Ware imprint.

Since his debut album “In Moll” (Kompakt - 2001) Guentner’s tracks have increased in groove and grew into the smooth tech-house-tracks on the successor “audio island”, which appeared two years later. His remix of the Talk Talk classic “Such A Shame” ended up on the turntables of djs around the globe. and just like his songs, Markus Guentner is a popular guest in clubs across the usa, asia and europe.

In 2005, Markus Guentner released his third album “1981”. each of the eight album tracks easily runs for seven minutes and largely gets along without beats. this is ambient music at its purest.

At the end of the year, a rework album called "Underarms/Sideways“ was published on the legendary British label 4AD and represented a continuous ambient production for the hero of the indie shoegaze label Ivo Russell-Watts aka The Hope Blister.

in March 2006, the album „lovely society“ was released on Ware. On this album, the artist once again published his latest 4-2-the-floor tracks, the same as he’s been doing since 2001, but for the first time he also proved vehemently that his understanding of house and techno goes way beyond dub and minimal house.

Spex Magazine describes Guentner as a "minimalist metropolis refuser”, who thanks to his affinity to ambient and shoegazing pop and indie manages to “put works into the world that are extremely smart from a popcultural perspective”.

However, Markus Guentner intends to achieve more than to just make music from regensburg. since last year he’s been the co-host of a regular club event called Sublime, which aims to unite indie, shoegaze and electronica under the same mirror ball.

At the moment he is once again working on new tracks, which are sure to be heard soon outside the city limits of Regensburg.