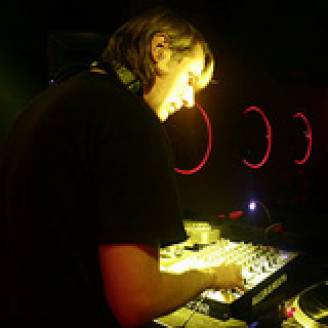 Hey, disciples of the decimal system, there’s a party going on: Ware is celebrating its – unbelievable but true – 10th anniversary. Because of this fact Mathias Schaffhäuser is on tour since Febuary and will continue this trip until late summer. And, as a special present to himself and WARE, Schaffhäuser will perform live for the first time since ages on the “10 Jahre Ware” Tour! And people love it – like Basel’s Presswerk Boss wrote as a Myspace comment: “One of the best Live-Performance ever :-) Thanks, Mathias!!“ Or Alfredo T. from the Fever Crew, Bilbao: „Everybody is talking about it here, you are in the right track man!”

For sure a real brithday needs a cake, and you will find this on the cover of “10 Jahre Ware”, the jubilee 12” on WARE. The two tracks on it are distinctly new yet retrospective at the same time. Both are largely based on samples from Ware tracks, which have more or less been edited and re-assembled. WARE connaisseurs will definitely take great pleasure in assigning the individual sounds and motifs to the original acts which are (among others) And.id, Dominik Eulberg & Wolfgang Thums, Jin Choi, Losoul, Markus Güntner feat. Acid Maria & Ziggy Kinder.

Mathias Schaffhäuser’s around in the techno and house scene since 1994 and has released tracks on WIR Recordings, Lebensfreude, Neopren, Definitive Records (house sub-label of Plus-8), Blaou Sounds, Force Inc., Multicolor, Frisbee Tracks and some others. In 1997 he started his own record label WARE which released 76 twelve inches until now (as of March 2008).

In January 2007 Mathias released his 2nd remix album "RE:2" on Multicolor Records with exclusiv mixes for Pan-Pot, Dapayk & Padberg and DJ Good Groove. The year ended with his long time project "God Is Dead", inspired by the “Manifesto of Evolutionary Humanism” ("Das Manifest des evolutionären Humanismus"), written by german author Michael Schmidt-Salomon. Electric Indigo says “Thanks for this great record! Music and concept are excellent. I’ve always been all for an evaluation and revitalization of the enlightenment process :-) Congrats!”

On the 24th of January this year Mathias’ next EP called "LIfe" with a remix by Mathias Kaden (Vakant Rec.) was released on WIR Records, and on the 11. of Febuary our jubilee EP "10 Jahre Ware" / "10 Years Of Ware" appeared on the scene with 2 epic tracks, one by Ziggy Kinder and the other by Mathias. Both tracks reflect the Ware history by using samples of the the label’s past 10 years + fit them together with new + unique ideas to 2 new exciting monster tunes.

Also in stores at the beginning of Febuary: Mathias’ remix for [a]pendics.shuffel’s "No Reduction" on Adjunct Rec.

In may the EP „Holy Pause“ will follow, also on Adjunct Rec.

Schaffhäuser’s motto at the turntables is: Purism sucks! The quality of the music is what’s important, not sheer functionality and a perfect mix. That is: at times his sets can be rather varied from Ware-style music to thumping techno. His current favourites still come from labels such as Cargo Edition, Cadenza, Mobilee, Vakant, Circus Company - just to name a few.