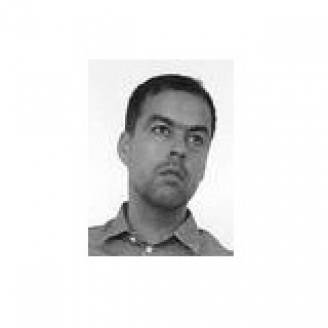 Lothar Hempel was born on 1966 in Cologne, Germany, Currently lives and works in Cologne. The title of Lothar Hempel's new installation at the Institute for Contemporary Arts is a big name for a small show. But it's not just the title that makes big claims. Lothar Hempel, a 36-year old German living in Cologne, has a long list of group and solo exhibitions to his credit, a rave review from Frieze magazine, and a contract with the alarmingly fashionable Anton Kern Gallery in NYC. So one goes to this show with every expectation that Hempel is going to be quite good. And the ICA seems pleased enough with its new commission. The ICA's director Philip Dodd has helpfully set out its merits:

In a bewildered London art world and in a newly repoliticised Britain, it's a great pleasure to welcome Lothar Hempel's very resonant work. It addresses the cancellation of utopian imaginings in a world where all is propaganda, or at least often is - and it does so by engaging with the history of art. It's a rare achievement. To which I can only add, not nearly rare enough.

Propaganda is, in fact, an installation-by-numbers, a faintly lazy exercise in rounding up a few disparate items, pasting up a few sheets of the Frankfurter Allgemeine nearby and hoping that it will all end up in a pavilion at some biennale somewhere in a few years time. Its proponents display a certain anxiety about the way in which it ought to be read. Is it, for instance, about propaganda? How political is it? Or is it simply another one of those gut-churningly circular and self-referential conversations with which a certain strand of post-post-modernism insists on boring the shades of its ancestors? The latter, almost certainly - not that it much matters, because its tropes are so hackneyed, its visual force so weak and its faux-casual moments of prettiness so cheap. Why not stick up a few faded Polaroids of old Joseph Beuys installations and be done with it? Or to put it another way, if there's a long lineage linking, say, David's Death of Marat with the Russian constructivists and Fluxus and who knows what else, we can only hope that it is not ending up here, in the ICA, under these high vaulted ceilings with this melancholy autumnal light seeping in from St James's Park and the tourists drifting aimlessly along the Mall outside.

So what is there to find in the first of the three rooms, titled Streik (Strike)? There is a sort of pierced wooden screen, a few upturned plastic chairs, two coffee-percolators but no cups, a non-descript hanging sculpture, a few boringly doctored newspapers pasted onto the walls, and a television monitor placed on the floor. The monitor shows a dreary black-and-white film, in which a woman eats some pasta, finds a key in her mouth and extracts it, and makes an unconvincing show of using the key to open the forehead of another character. Of course we could all fill up several sides of A4 'interpreting' this, or rather, nervously ascribing some sort of meaning to what might otherwise seem almost terrifyingly vapid. So the film makes references to surrealism, and the gothic resonances of the screen are about Catholicism and German-ness, and the newspapers are about the way in which the (conservative) news is obviously manipulated before it gets to us. As for the name, I struggled to connect it with anything in the room, other than those upturned chairs and their hints of arrested activity.

Conclusions: Lothar Hempel's new installation at the Institute for Contemporary Arts, is a big name for a small show. But it's not just the title that makes big claims. Lothar Hempel, a 36-year old German living in Cologne, has a long list of group and solo exhibitions to his credit, a rave review from Frieze magazine, and a contract with the alarmingly fashionable Anton Kern Gallery in NYC.