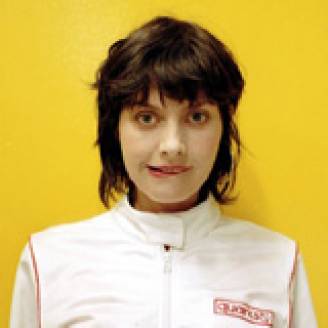 In October 2004 QUARKS present their long-awaited new longplay album QUARKSLAND, the follow-up to their major label debut "Trigger me happy" in 2002. QUARKSLAND is the 4th album release in the band's eight year history, having started on the Berlin label "Monika Enterprise".

From one point of view, Quarksland has four walls and a white-painted wood floor. It is a white room in Prenzlauer Berg with a white bed and a white drape of a curtain that can be let down to shut out the outside world. It's a fine and private place, a place where thoughts can unfold, because they are not distracted # the precondition for what the Quarks (taken from Joyce's "Finnegan's Wake": the stuff that atoms are made of) call "friction". As is well known, friction generates heat, and the brightness of the room should not fool you either. The inner life of the Quarks tends to be dark.

Last year, between January and April, Jovanka von Willsdorf went on a journey through the outside world; chance meetings and unforeseen events proved lucky in the sense that a day is a good day when there is a song to show for it # even if encounters are sometimes painful. More than 20 songs. Back in the white room in Berlin, Jovanka and her partner in music Niels Lorenz decided on 13 of the songs, two of them by Niels Lorenz. Together they played and arranged the songs, which were then co-produced with Moses Schneider and Ben Lauber to form the present, fourth Quarks album "Quarksland". For eight years, von Willsdorf and Lorenz have been working together as the Quarks. This was the first time, however, that they set up room mikes and recorded the core tracks of the album # the vocals, the acoustic instruments # in the white bedroom. "Loving and unscrupulous", says von Willsdorf of this procedure, which is so obvious # and yet so seldom used. (Daniel Lanois once mentioned in an interview that he had recorded his best records, with U2 and with Bob Dylan, in kitchen-diners; but this is by the way.)

The work of the two Berliners-by-choice from Hamburg was constantly interrupted # the tram goes by and leaves frequencies behind, a mobile phone rings outside, musicians busk on the pavement # but this isn't obvious from the recordings. On the contrary, the sound of the big city has slunk in, scarcely identifiable on the hard-disc recordings, beneath the sound waves of the guitar, the bass, and Jovanka's voice. That gives the songs a fascinating body of resonance, which has to be mentioned because so many sound constructs today believe they can manage very well without it. The methodology is not unlike that of Martin L. Gore, the songwriter of Depeche Mode. He was another one who used not to give songs to the band until they sang and played wonderfully on piano and guitar.

The Quarks took the acoustic sound and in a second stage counterpointed it against electronic soundscapes, breathing, hissing, creaking microcosms full of a life of their own. That naturally raises the question whether hard discs dream of electronic symphonies all night, and prompted Jovanka and Niels to leave the room at a certain point last autumn and move over to Der Transporterraum in Kreuzberg, where they teamed up with Moses Schneider and Ben Lauber to further distil the electro-acoustic essence. There is a new documentary film by Harry Rag (S.Y.P.H.) about "Quarksland", in which the unseen cameraman, his machine trained on Jovanka's face, follows the gestation process of certain songs from the singing of a tune into the dictaphone through to the finished work. Schneider too can be heard talking in this study and, as an outsider to some degree, he sheds light on the world of the Quarks: "It is strange, but where others work long and hard to turn an idea into a song, with the Quarks the song is always the first thing that is ready. We have taken these first few moments of music-making in Jovanka's bedroom and composed the electronics around them."

"Quarksland" is about progress. This is one way to see the "damage inventories" (von Willsdorf), the inner monologues about the farewells that are necessary because one sees life as a journey and so is constantly leaving home. "Quarks songs are like travel reports," says Jovanka, "that explains why in Quarksland, you never get lost." The beacon is Jovanka's voice, giving the melancholy in the songs a body; after all, and this issue must be addressed, Quarksland is not a physical place but a kind of filter through which the world can be observed. Of course the first studio setup that von Willsdorf and Lorenz created to record their first three albums "Zuhause", "Königin" and "Trigger Me Happy" was also called "Quarksland".

Today, on Album No. 4, it is noticeable that the album sounds rawer than all that Quarks have made before, but at the same time warmer and denser. The stretch of the songs is wider than ever; the song sequence jumps back and forward between English and German. A marrow-meltingly beautiful song composed and sung by Lorenz, "Wer weiss" (who knows) with the enigmatic refrain "So wie ein Schiff das untergeht / Und die Welt sich trotzdem weiterdreht / Kann ich uns von oben sehen / Bleib nicht stehen" (just like a ship that goes down / and the world keeps turning anyway / I can see us from above / do not stand still) fits on "Quarksland" just as naturally as all the pieces written by Willsdorf, among them such different pieces as the electro-funky "Picture Me" or "Du entkommst mir nicht", a dark love ballad with threateningly enticing words that seems as immutable as a song that has existed from the start of time. The new pieces by the Quarks challenge us by taking us seriously, they possess the gravity of a star system, they remind us above all else that there is nothing more thrilling than life. They are a great venture.