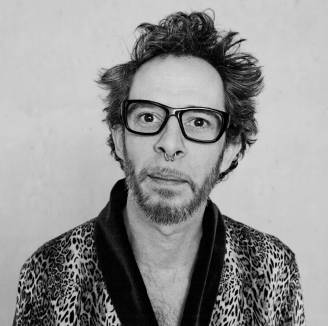 In 1998, T.Raumschmiere aka Marco Haas relocated his life and label operations to Berlin - and to the world of electronic music, which he took into his dark heart and as an opportunity to rename himself after characters of a William S. Burroughs story: the Dreamcops, translated into 50's German as "Traumschmiere" and marked for a new tomorrow by a smartly placed period. T.Raumschmiere was born, and a bold new chapter of electronic music from Berlin was being written. His first full-length releases on Shitkatapult were dedicated to the darkly charged traces of an electronic music that combined bass drum and ambient, snottiness and greatness: »Stromschleifen« (Shitkatapult, 2000), »Zartbitter« (Shitkatapult 2002).

At the same time, some 12"es were spotted on Cologne's Kompakt imprint: »Boltzplatz« (Kompakt 2000), »Musick« (Kompakt 2001). The latter were big rave news with a terrific sawtooth confidence, an iconized rock masculinity that didn't only go all jolly and funny, but also big and serious. On Kompakt, the real shit always pointed more towards Wolfgang Voigt, to the realm of inventions. In 2002, Marco topped off this era with a milestone ambient double album on the it-label at the time, Chicago's Hefty, rated artistically worthwhile and endowed with yet another clearcut name from the treasure chest of awesome inventions: »Anti« (Hefty 2002). Worldwide tours followed quickly.

A star was born. Self-made and crazed-out. The whole shebang got consolidated on a Shitkatapult album, cobbled together from the most important material of the aforementioned releases and one ingenious claim: »The Great Rock N Roll Swindle« (Shitkatapult, 2003). A pretty big whopper in the techno circus. Freak-outs ensued. Daniel Miller had to have it and T.Raumschmiere got signed on Novamute, the club outlet from London's Mute label, which was just about to swim towards the EMI shark, or rather whale belly. T.Raumschmiere was in the right place at the right time, a big label with towering fellows such as Luke Slater, Plastikman, Speedy J, Motor, Cristian Vogel and so on and so forth. T.Raumschmiere scored a mega hit with »Monstertruckdriver« (Novamute, 2003) and became a staple in the line-ups of all the essential clubs and festivals.

After the Novamute full-length »Blitzkrieg Pop« (2005) came around many were disapointed with the new rock paradigm and the tattoed insolence. Where's our Sawtooth Rave King? It led right to the demise of EMI, a logical consequence among others. T.Raumschmiere released two more full-lengths on Shitkatapult... the dramatically underrated ambient masterpiece »Random Noize Sessions Vol.1« (Shitkatapult, 2006), and his most-accomplished rock album »I Tank U« (Shitkatapult, 2008). But the fans were still demanding the "Monstertruckdriver" and a T.Raumschmiere trio bravely battled its way through gigs and tours.

In 2016, Shitkatapult sub label "Albumlabel" presented a pretty big ambient album without a title, which Haas recorded together with friend and colleague Ben Lauber. Two full-lengths emerge from his collab with Ulli Bomans aka Schieres under the Shrubbn!! monicker (Echos, Shitkatapult 2012, and Europa, Shitkatapult 2016), alongside remixes for Dave Gahan, Warren Suicide or Apparat. Series of concerts with the exceptional Jazz/Noise guitarist Caspar Brötzmann furthered T.Raumschmiere's steady quest for uncharted terrain. And didn't exhaust the artist, but rather exploited full potential.

In May 2017 Cologne's Kompakt released his epic solo album called »Heimat«. Back to the roots - but also into heaven! This new full-length presented another side of T.Raumschmiere, which was always present, but never got much airtime: the artist, the author, the composer with the crystal-clear sound. A wonderful techno album that neither excludes Ambient, nor gets reduced to a constant asskicking. It's perhaps the best recording from this man who asks so deeply, so extensively, so much. And at some point even answers.