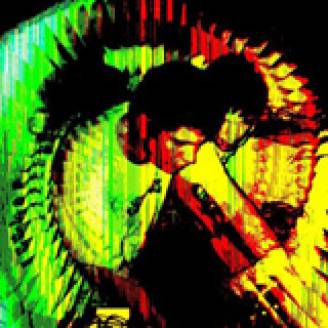 The MFA are Rhys Evans (Welsh) and Alastair Douglas (not Welsh), a live dance duo from London and Wales who stand first in line to the throne at the head of the UK live dance duo dynasty. Lofty aspirations indeed, but with repeated comparisons to the giants of dance music like The Chemical Brothers, Daft Punk, The Prodigy, Orbital and Underworld echoing from all corners whenever The MFA are in town, their ambition would appear not to be misplaced.

The daft duo have earned this reputation over the last few years with a wide-ranging musical output, always underpinned by an essential pop sensibility and a healthy dose of that early 90s spirit. Rising above the limitations of any one genre, they kicked off proceedings with the lush deep filtered house of their debut 'The Difference it Makes', before roaming off through epic trance ('Motherload') and belching acid ('The Sphinx'), electro-breaks ('Disco to Break') and comedy rave ('Rinse Time'), with a spot of clownstep thrown in for good measure. This eclectic approach, harking back to a better time before the purists and trainspotters kicked all the fun out of dance music, now brings them to the unashamed New Order-esque pop of forthcoming single 'Throw it Back (We Will Destroy You)', edging them that little bit nearer to their regal destiny.

Following in that honourable British tradition of live dance performance that has stood their forefathers in such good stead, these crown princes are the proud possessors of a faultless lineage, and their claims to occupy this most coveted of thrones are second to none. Their impeccable pedigree boasts a sprawling country seat in their longstanding relationship with the leafy Border Community, as well as a London residence courtesy of the East End's Precinct label. There was even a spot of meddling in the colonies with an early release on underground Australian house label EQ.

And like our own Royal Family here in the UK, the MFA also have strong links to their German counterparts, enjoying the patronage and support of the German technocracy. Uncle Wolfgang in Cologne was an early fan, who loved their first release "The Difference it Makes" so much that he just had to have a piece of it for his own stately Kompakt empire, licensing it for his Kompakt Pop offshoot. Later, Aunt Ellen in Berlin snapped up their 'Zone Day' EP for her legendary Bpitch Control label - and surely there could have been no better home for this head-on collision between electro and rave. Aunty Allien also let them go to work on a remix of 'Magma', taken from her 'Thrills' album, which the pair can add to their already pretty impressive string of remix credentials, including EMI France's Telepopmusik and Domino's Junior Boys, and most recently a remix for Cologne cousins Boxer.

But playing live is really "what The MFA are all about", a point which the duo are intent on proving with each and every one of their club appearances. Their party-friendly sound has already tamed an impressive array of club legends, including Rex (Paris), WMF & Maria (Berlin), Bed & Space (Miami), Nitsa & The Loft (Barcelona), with a heavy touring schedule lined up ahead of them over the coming months. Their ever slicker show adheres to that golden formula of something old (all the hits from their impressively bulging back catalogue), something new (a sneak preview of their anthems of the the future) and, for good luck, something borrowed: perhaps a snatch of 'Mandate My Ass', some bastardised LFO, or even the Krypton Factor theme tune.

Offstage, like every legendary band before them, the in-fighting inevitably takes over. MFA tours have turned into one long drawn out competition, with points awarded for drinking the most beer, eating the most veal at dinner, or lucking out with the biggest hotel room. But once on stage theirs is a marriage made in heaven: one hour of harmonious musical union that provides ample justification for all the comparisons with the greats. Then all too soon, this fleeting glimpse of happiness has past, as The MFA fly off home on their separate flights, otherwise meeting up only to write music together after disbanding their Bottom-style houseshare in the nick of time earlier this year.

One thing however is clear: they may fight like a pair of bickering siblings, but deep down The MFA need each other very much. Like musical superheroes waging a daily battle against the dull and the worthy, the world really needs The MFA right now too.

"There are shades of U2 basslines and twisted melodic Underworld about Alastair Douglas & Rhys Evans' The MFA, but in all honesty they've carved a path much their own. There aren't too many left doing that." (DJ Magazine)