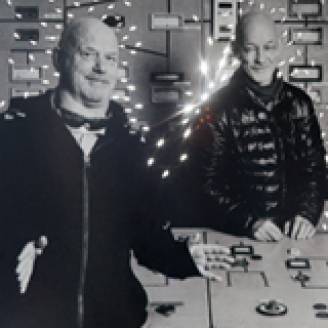 The Orb virtually invented the electronic genre known as ambient house, resurrecting slower, more soulful rhythms and providing a soundtrack for early-morning ravers once the clubs closed their doors. The group popularized the genre as well, by appearing on the British chart show Top of the Pops and hitting number one in the U.K. with the 1992 album U.F.Orb. Frontman Dr. Alex Paterson's formula was quite simple: he slowed down the rhythms of classic Chicago house and added synthwork and effects inspired by '70s ambient pioneers Brian Eno and Tangerine Dream. To make the whole a bit more listenable -- as opposed to danceable -- obscure vocal samples were looped, usually providing a theme for tracks which lacked singing.

Paterson had worked as a roadie for Killing Joke during the '80s, and began to be influenced by the explosion of Chicago house music in England during the mid- to late '80s. He joined the A&R department of EG Records -- the home of Brian Eno himself -- and first recorded as the Orb with Jimi Cauty (who had played in the Killing Joke side project Brilliant and later gained fame as one half of the KLF). The duo's first release as the Orb, a failed acid house anthem named "Tripping on Sunshine," appeared on the 1988 compilation album Eternity Project One. In May 1989, the Orb released the Kiss EP, a four-tracker dedicated to -- and heavily sampled from -- New York's KISS-FM. Paterson had begun to DJ in London around this time, and Paul Oakenfold recruited him to man Land of Oz, the chill-out room at his club Heaven.

Paterson's ambient sets incorporated a wide array of samples and sound effects, ranging from BBC nature recordings to NASA space broadcasts and special effects. With those samples mixed underneath the music of ambient pioneers such as Eno and Steve Hillage, his sets became popular alternatives for dancefloor victims and worn-out club kids. Hillage happened to be in the room one night when Paterson sampled his Rainbow Dome Musick album. The two became friends and later recorded together, Hillage contributing guitar to the Orb's "Blue Room" single and Paterson working on the debut album by Hillage's System 7 project (or 777, as it is known in the States due to copyright problems with Macintosh).

The Orb's first actual foray into ambient house appeared in October 1989 on Paterson's WAU!/Mr. Modo label. The 22-minute single "A Huge Ever Growing Pulsating Brain That Rules From the Centre of the Ultraworld," which sampled ocean noises and Minnie Riperton's "Loving You," actually hit the U.K. charts that year. The single became popular with indie kids as well as club DJs, and earned Paterson and Cauty the chance to re-record the song in December 1989 for a John Peel session. (That version was released two years later, alongside their second session, on the Orb's Peel Sessions album.)

In early 1990, Dave Stewart asked Paterson and Cauty to remix his single "Lilly Was Here"; the track hit the U.K.'s Top 20, and the Orb's remix work soon became just as popular as their original material. Erasure, Depeche Mode, Yello, Primal Scream, and more than 20 other bands eventually received the remix treatment before Paterson began to cut back his remixing work in 1992. (One of the only outside remixes of Orb material occurred around this time when breakbeat pioneers Coldcut remixed the Kiss EP for a U.S.-only single.)

Alex Paterson and Jimi Cauty had been recording an album during the turn of 1989-1990, but the two split in April 1990 -- a result of Paterson's fear that the Orb had become known more as a KLF side project than an original act. Cauty stripped Paterson's contribution to the recordings and released the eponymous album -- credited simply as Space -- later that year. (Cauty released another ambient album that year: Chill Out, this time with his KLF partner Bill Drummond.)

In the meantime, Alex Paterson had been working with Youth (from Killing Joke) on the new track "Little Fluffy Clouds," with a melody incorporated from composer Steve Reich. The single appeared in November 1990, sparking the wrath of the sampled Rickie Lee Jones, whose dialogue with Levar Burton -- from the PBS-TV children's program Reading Rainbow -- was sampled for the chorus and title of the track; Big Life later settled out of court for an undisclosed sum. Though the single failed to place in the charts, its laid-back vibe made it a big hit on the dancefloor.

Youth's other commitments made it impossible for him to become a permanent member of the Orb, so Paterson decided to recruit Kris Weston (nicknamed Thrash for his punk/metal roots), a young studio engineer who worked on "Little Fluffy Clouds" and had recently left his previous band, Fortran 5. The Orb performed live for the first time just after the pairing, early in 1991 at London's Town & Country 2 with Steve Hillage on guitar. The group's live dates soon became their forte, breaking down the boundaries which had previously separated electronic music from rock. An Orb show encompassed the best elements of performance hall and club, with colorful light shows and visuals, and a relaxed, positive groove rarely found in electronic circles.

All this was fine and good, but the Orb had not yet released an album, the vehicle which virtually all modern musicians use to make artistic statements. Finally, in April 1991, The Orb's Adventures Beyond the Ultraworld was released in England to considerable critical acclaim. Its popularity extended to the general public as well, pushing the double-album into Great Britain's Top 30 LP charts.

By mid-1991, the Orb had signed a deal to release Ultraworld in the States, but were forced to edit the album down to one disc. (The full double-disc version was later released in the U.S. by Island.) Paterson and Thrash toured Europe during 1991, and compiled the Orb's first two Peel Sessions in November 1991. One month later, the duo released The Aubrey Mixes as a Christmas special. The album, a remix compilation with reworkings by Steve Hillage, Youth, and Jimi Cauty, was deleted on the day of its release, but still managed to place in the U.K. Top 50.

In June 1992, the new single "Blue Room" hit the British Top Ten. The longest single in chart history at just under 40 minutes, it earned the Orb a spot on Top of the Pops, where they ruminated over a chess game and waved at the camera while a three-minute edit of the single played in the background. Released in July, the album U.F.Orb concentrated not on space, but the beings that inhabit it. (The actual "Blue Room" is an installation where the U.S. government allegedly keeps the relics of a 1947 saucer crash outside Roswell, NM.) It hit number one on the British album charts, and also did well with critics, who praised it and the duo's sold-out tour of England.

The non-album single "Assassin" -- originally slated to feature vocals from Primal Scream's Bobby Gillespie -- followed in October, and it reached number 12 on the British charts. The U.S. release of U.F.Orb appeared two months later, with initial copies including a second disc with the full version of "Blue Room" plus mixes of "Assassin." A limited LP release of U.F.Orb in England included a live recording of the Orb's appearance at London's Brixton Academy in 1991. (The date was later released on video with an added CD soundtrack as Adventures Beyond the Ultraworld: Patterns and Textures.)

Though the Orb had released several hours of recordings and many remixes during its first three years of existence, the beginning of 1993 prompted a dry spell of over a year and a half. The problem wasn't a lack of material; Paterson and Thrash continued to record, but Big Life Records had begun a controversial campaign to reissue several early singles. The Orb threatened to release no new material until the label promised to cease and desist, and negotiations stalled while the duo looked to opt out of their contract. In the meantime, Big Life spent 1993-1994 reissuing five CD singles and two other 12" releases, including "Little Fluffy Clouds" (which hit the British Top Ten), "Huge Ever Growing Pulsating Brain," and "Perpetual Dawn" (the second single from Ultraworld).

Paterson finally signed an international deal with Island in 1993 and released the stopgap Live 93 later that year. The double-disc set -- which hit number 23 in the album charts -- included highlights from Orb appearances in Europe and Japan, and featured another clever dig at Pink Floyd: the cover has a large stuffed sheep suspended over a power station, la Floyd's Animals cover.

The Orb's first studio release for Island appeared in June 1994. Pomme Fritz (a "little album") was quite a departure from ambient house, the field that had since caught up with Paterson's revolution of the late '80s. The album has a schizophrenic quality that portrays the group caught between two worlds: the pastoral ambience of the first two albums, and the harsher, almost industrial, rhythms which the Orb were pushing forward. Pomme Fritz made number six on the British charts, but critics hated it, charging that Paterson had finally disappeared up his own arse. They even compared him to Pink Floyd's own Syd Barrett, who masterminded the psychedelic classic Piper at the Gates of Dawn, but later slipped out of the band as the world's first -- and most popular -- acid casualty.

Pomme Fritz was also a watershed in that the role of Kris Weston had diminished highly. Credited on Pomme Fritz only as an engineer, Weston did appear with Paterson on the August 1994 side project FFWD, the collaboration between Robert Fripp, Orb members Paterson and Weston, and Orb contributor Thomas Fehlmann (hence the name: Fripp, Fehlmann, Weston, and Doctor). By early 1995, Weston finally left the Orb to devote time to his own projects. Before the duo separated, however, they teamed for the Orb's most famous live appearance: on a rave bill at Woodstock 2 with Orbital, Aphex Twin, and Deee-Lite.

Taking up the slack from Weston's departure was Thomas Fehlmann. The Orb had previously remixed a single from his Sun Electric project, and most of Pomme Fritz was recorded at his Berlin studios. Finally, almost three years after U.F.Orb, the new and improved group released the Orb's third studio LP, Orbus Terrarum. With a concept and a sound rooted firmly on terra firma, the album's dense rhythms and return to natural samples heralded a turn away from the cosmic fascination within ambient house -- which had been nurtured in large part by Ultraworld and U.F.Orb. During 1995, Paterson and Fehlmann mounted an ambitious world tour. After the release of a double-disc remix compilation, the Orb returned to the great beyond with the spacy sounds of 1997's Orblivion. The retrospective U.F.Off followed in 1998, and though Paterson and co. finished their fifth studio effort Cydonia soon after, Island delayed its release until the new millennium. A shift in labels was in order so 2004's Bicycles & Tricycles found the Orb on Sanctuary. Working their next label change into the album title, Okie Dokie It's the Orb on Kompakt appeared at the end of 2005, as did the rarities compilation Orb Sessions, Vol. 1, which was released by the Killing Joke associated label Malicious Damage.