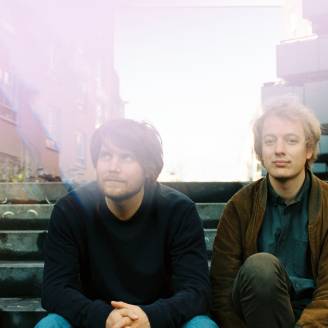 Hearing Weval’s music for the very first time, you might wonder from which lost vault of an accomplished veteran musician that these sounds have been pulled out from. It just so happens to come from the young Amsterdam based duo named Harm Coolen and Merijn Scholte Albers. Their incredibly catchy arrangements have won over a global fan base thanks to their immediately identifiable songwriting.

Since their debut in 2013 with the impressive 'Half Age' EP on Atomnation, Weval have found a welcoming home with the KOMPAKT family, where the duo nourished their very own brand of crossover rapture on the glistening 'Easier' EP in 2014, followed by the bold and beautiful 'It’ll Be Just Fine / Grow Up' in 2015, which saw the two sound smiths digging deeper into the granularities of their electronic funk more than ever before.

2016 was the year of confirmation for Harm and Merijn as they delivered their self-titled debut full-length 'Weval' - not a mere collection of interchangeable tracks, but an organically flowing record with emotional heft and a narrative thread bound to expand through their coming releases. The album made countless end of year lists and was proclaimed by Pitchfork as "the rare electronic record that is so strong and obviously appealing that it can't help but end up in the hands of casual listeners". The year after, the album was complemented by a special three-track remix EP featuring interpretations from Margot, Red Axes and Kasper Bjørke.

Three years on since its predecessor's release, Weval are set to land their second full-length attempt. Soberly titled 'The Weight' – this shows them evolving their sonic palate and found a means for the duo to put the highs and lows of a lifetime into musical perspective. Their strength lies in seeing them perform live as their music takes on a new dimension as they evolved into a 5 piece band. Having already toured across North America and Europe including performing live at mainstay festivals such as Sonar, DGTL, Lightning In A Bottle, Gottwood, Pukkelpop and Lowlands, 2019 shall bring Weval to even more festival stages and on a global headline tour as a band. "The real fun is in listening closely to, and marvelling at, Weval’s craftsmanship. No two measures are exactly the same, the melodies draw memorable shapes, and the rhythms approach and recede in the ear—all part of a very successful effort to engage the listener’s brain and level out their mood." - The Atlantic

"Coolen and Albers’s sense of pacing is impeccable, seemingly knowing exactly how long to tease each part for maximum effect before moving on to the next. It is perfectly sequenced, mysterious and moody. For a debut album, the fully-formed nature of their songwriting, sublime pacing and monolithically tasteful atmosphere is remarkable." - Pitchfork