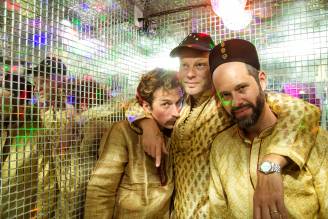 In the years since their inception WhoMadeWho have established themselves as one of the definitive underground bands of their generation. A group whose grasp of emotional depth, heartrending melody and inspired songwriting is exceptional, the Danish outfit is comprised Tomas Høffding, Tomas Barford and Jeppe Kjellberg. They have become renowned for their exemplary back catalogue, consummate professionalism and standout performances all over the globe, from Roskilde to Sonar, Melt! to Burning Man, producing six albums and a plethora of EPs, singles and remixes on labels like Kompakt, Innervisions, Life & Death. With Barford’s penchant for electronic music poetically juxtaposed with Høffding and Kjellberg’s respective backgrounds in rock and jazz, their music is an electrifying combination of sounds, merging a variety of influences to produce a unique sonic fingerprint that is emotive, irresistible and immensely satisfying.

The secret of WhoMadeWho's success lies in their constant desire to shake things up. In recent years the trio have been taking a deep dive into the world of electronic music, tapping into their goldmine of connections within the scene to spearhead an array of collaborations. The result is a series of three EPs to be released with seminal techno label Kompakt. WhoMadeWho’s focus on electronic productions is not so much a departure for the band as an extension of an existing passion. Finding kindred spirits in the electronic music community, the band have enlisted their talented comrades to assist them in cultivating their next gallant manoeuvre.

The three men have a long history with electronic music, signing releases to labels including Life And Death, Kompakt and Ellum Audio and performing at Watergate Berlin, Cityfox New York City, Uberhaus Beirut and many more of the world’s most prestigious dance music clubs and festivals. Barfod has a long-standing DJ career outside of his activity with WhoMadeWho, playing iconic venues such as fabric and Panorama Bar and releasing his own solo productions. As a DJ and producer, he has achieved widespread notoriety and respect for his technical ability and deep knowledge. In recent years WhoMadeWho’s connection to the club world has been galvanised by their increasing work with friends such as Rampa, ARTBAT and Ruede Hagelstein and labels like Watergate. Their first release of 2020, ‘Obstacles’, was signed to Blue Shadow Records, a label owned by friends Chaim and Jenia Tarsol. Merging hypnotic disco grooves with psychedelic melodies and stirring yet reassuring vocals, it was accompanied by lowkey funk jam ‘Balt’, plus remixes from Marvin & Guy and label heads Chaim and Jenia.

In 2019 the band became the latest in an esteemed line of artists, that includes Solomun, Ellen Allien and more, to curate and mix a compilation for German powerhouse, Watergate. Watergate 26 placed several of their own productions alongside artists like Echonomist, Oona Dahl, dOP and Chaim, among others, demonstrating their ability to apply their expertise to the DJ mix format with an intuitive understanding of groove and emotion.

This latest stylistic shift in the band’s evolution highlights their versatility and passion for creating new challenges for themselves – all three band members relishing the chance to explore different terrain in great depth. Part of WhoMadeWho’s charm lies in their divergent musical backgrounds, meaning that they approach various styles with a touch of innocence; Høffding and Kjellberg perhaps referencing Pink Floyd during a studio session, while Barford may allude to Carl Craig and vice versa, for instance. It’s what makes them such a fascinating group, capable of producing varied musical styles with a refreshing combination of vulnerability and confidence. As a group they are a unified force with three very different egos burning at their core working as the catalyst for their creative energy, with a little extra sparkle added by inviting other artists to join them in the studio.

Modifying the songwriting and production process to cater for the dance floor has been particularly enlightening for the group, as it requires a hypnotic use of rhythm, melody and vocals that can be difficult to achieve. It’s about tapping into that feeling of being on the dance floor when a simple, yet contagious hook infects your mainframe and refuses to let go. Coming from a songwriting background means the group has adopted a more reductive method for creating parts of their songs; producing trippy, narcotic melodies and vocal hooks that are alluring and enchanting. The process has stimulated their appetite for making music, stretching them artistically while they’ve added a whole new dimension to their productionprocess by including other musicians in their studio operations. The result is a slew of new productions. Three EPs with Kompakt - including link ups with Ame, Michael, Mayer, Terr, Adana Twins, Echonomist and more - plus a return to Life And Death are among the releases already penciled in, with more to come.

On stage too the trio have evolved from the traditional band blueprint to fresh configurations designed for the club. Their 'Hybrid DJ Set' places Barford in the booth playing a DJ set while one of his bandmates complements the music with improvised singing, keys and effects. While their new 'Live Set' deconstructs the band format and reassembles it as their current live show: One member handles programming and mixing while the other two band members are singing and playing a range of live instruments including bass, guitar, synths, effects, theremin, glockenspiel and more. It’s daring, playful and exciting, for both the band and their audiences. The scintillating Hybrid DJ setup was showcased at Burning Man aboard the Mayan Warrior art car, where the three men played a mesmerising sunset show in 2019. Tours across Mexico and South America are already booked in, plus an appearance at SXM Festival on Caribbean island St. Martin.

Always pushing forward, WhoMadeWho are pouring enigmatic energy and positive dance floor vibrations into their current exploration of electronic music. It transports them back to their beginnings, when playing improvised jam sessions that merged their influences was all they wanted to do. They’re a band that are willing to push themselves, to grow, to stretch themselves creatively and explore the full spectrum of their potential. With a renewed focus on dance music, a collection of new songs and their alternative stage setups, they are entering the next phase of their existence. Full of creative energy, excitement and enthusiasm, WhoMadeWho are destined to endure as one of the most influential and vital bands out there today.