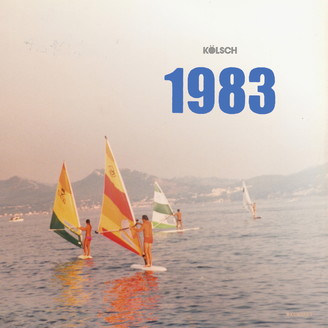 Revered Danish producer and live performer KÖLSCH follows his 2013 hit album "1977" (KOMPAKT 276 CD 107) with the new full-length "1983", again chaining up heroic techno tracks for a grandiose sonic journey to the vibrant heart of today's dance floor. Coupling contemporary production pizzaz with nostalgia-tinged soundscapes and sweeping melodies, this opus acts as both a skilfully composed portfolio of personal memories and a sublime collection of crowd-charming cuts - a modern classic in the making, coming from a master of his craft.

Hot on the heels of SPEICHER 84 (KOMPAKT EXTRA 84), featuring club crackers DERDIEDAS and TWO BIRDS, the latest full-length offering from KÖLSCH is very much a travel album: "When I was a kid in 1983, we used to drive through Europe every summer on the way to the south of France", he explains. "A lot of my early music memories stem from these long travels, as we would listen to all my father's favorite records on the cassette deck. After getting a walkman, I would make up my own soundtrack for travelling, with early electro and hip hop creeping into my life. My father of course did not like it, and it never grace the official cassette deck of the car, obviously"

These trips became a primary source of inspiration to a hungry young mind forced to sit on the backseat of a car for several days: "they were also journeys through the seasons. In Denmark, it would be spring time, so I could nearly see us driving through spring into the summer. The scenery would change, and so would the mood in the car." Informed by the symbolic quality of these slightly gauzy childhood memories, KÖLSCH's unique melange of emotional and functional elements works exceptionally well for the full-length format - a seamless transition of musing introspection and explosve expression, where catharsis never seems far away in dance-ready techno vignettes like MOONFACE, UNTERWEGS or PACER.

From beatless opener and title track 1983 to the filigreed piano banger DIE ANDEREN or the bleep-infused synth-fest E45, each cut operates as its own little time capsule, storing bits and pieces of recollection and then magically transforming them into epic, beat-driven soundscapes. Confronted with other producers' input (and other memories), these traits find themselves extended in the most interesting ways - TALBOT, THE ROAD and CASSIOPEIA (also featured on KOMPAKT EXTRA 79) make excellent use of GREGOR SCHWELLENBACH's emotive orchestral flourishes, while BLOODLINE's lyrics come to life thanks to the distinct timbre of TOMAS HØFFDING of WHOMADEWHO fame. A new powerful take on an earlier collaboration, PAPAGENO 30 YEARS LATER not only rejoins WAA INDUSTRY on vocal duty, but also ends the album on a wonderfully elegiac, yet hopeful note - basically turning water into wine, as we've come to expect from KÖLSCH.