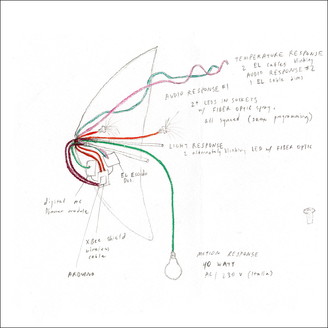 Play All LP
After releasing their own debut record in 2014 the Hamburg based group Sky Walking formed by Peter Kersten, Christian Naujoks and Richard von der Schulenburg now celebrates the launch of their self-titled label. By bringing together an international line-up of artists mostly associated with the new and experimental music scenes in cities like Hamburg, Berlin and New York Sky Walking not only establishes a link between different locations and their specific (local) scenes – with the Golden Pudel Club in Hamburg somehow functioning as a Bermuda triangle – but also between different generations of artists from these scenes.

By choosing Sergei Tcherepnin’s “Queer 1” as the first track on 41'36'', as the record is simply called, indicating the length of the album in John Cage style, the compilation not just draws on the legacy of early modular synthesizers (his uncle invented the “Serge”), but also – in a manifesto like way – points out the hybrid and genre-bending approach many of the artists on this record share. The ten tracks on the record are characterized by an openness towards improvisation and collaboration as well as an experimental attitude towards technology. The outcome is sometimes weird and nerdy, sometimes playful and humorous – never taking either the music categories “new” or “experimental” too seriously.

Konrad Sprenger for example, featured with the track “Distain”, invented a robotic multi-channel electric guitar, which uses the strings as frequency generators. It is tuned and set into motion by various electronically controlled mechanical movements. An even more performative quality has the Black Metal influenced duo Misanthrope CA, whose members Robert Kulisek and David Lieske prefer to play their dark and drony ambient tracks in neoprene suits. Jazz influences can be heard both in the fully improvised, cartoon-like piece by Sky Walking themselves and the filmic quality of Philipp Sollman’s and John Gürtler’s collaboration in “Gegen die Zeit”. While these two tracks were produced in the studio, Eve Essex and Dan Fox as well as Nowerk (F#X and Christian Naujoks) work with different means of live-recording in their collaborative projects. Rather mysterious appearances are the ones by Keller G and Gebrochene Beine. Whereas the latter mixes broken beats with a saxophone going wild, the first offers a dark and atmospheric, slightly uncanny soundscape. In-between longtime resident at Golden Pudel Club Nika Son takes us on a tense-ridden sonic journey with her track “Drissk”, purposefully paying tribute to the grand dames of the synthesizer.

The cover is another hard-to-categorize element of this new release featuring a sketch of an alien-like two part cyber-ceramic sculpture including motion-, light-, audio- and temperature-responsive sensors by artist duo Amy Lien and Enzo Camacho. It thereby echoes the blurred boundaries between the auditive and the visual, for a perspective shared by most of the artists represented on Sky Walking, as well as their roots in the 1960s and the graphic scores that since then have become an art form in its own right.