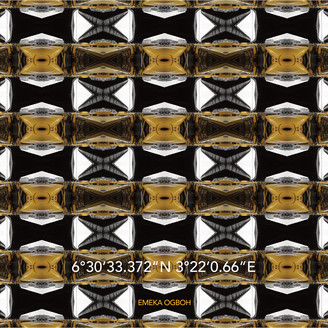 Play All 2xLP+DL
Nigerian sound and installation artist Emeka Ogboh will release his second album 6°30ʹ33.372ʺN 3°22ʹ0.66ʺE via his newly launched Danfotronics imprint for experimental electronic music from Nigeria, West Africa, and beyond. Out July 29, the album follows Beyond The Yellow Haze, which was re-released last year via Ostgut Ton sublabel A-TON after the inclusion of Ogboh’s composition “Ayilara” in the Berghain exhibition Studio Berlin.

While Beyond The Yellow Haze took a more macro sonic overview of various areas in Lagos, 6°30ʹ33.372ʺN 3°22ʹ0.66ʺE turns its hyper-specific geographical focus toward the sounds and voices within the city’s Ojuelegba bus station and its environs. It’s a sonic “zooming-in” to the anarchic, self-organized urban node at a critical transformational juncture, previously immortalized on Fela Kuti’s legendary track and critique of post-colonial Lagos, Confusion.

Ojuelegba was also the previous location of a sacred historical shrine created for Eshu, the Yoruba god of dance and confusion (amongst other things), and located at the area’s main intersection. This junction is the starting point for Lagos’s numerous yellow VW Danfo buses, whose drivers and conductors, recorded by Ogboh, provide a kind of verbal mapping of the neighborhood on the album; spoken descriptions of bus routes, food, spiritual geography, history, and prostitution. On 6°30ʹ33.372ʺN 3°22ʹ0.66ʺE, Ogboh converts these field recordings and voices into a musical ode to Ojuelegba.

Over eight tracks, Nigerian Pidgin, a form of Creole, takes center stage, guiding the listener from informal interviews on the origins of the name and descriptions of Ojuelegba via massive, cavernous drums, synth & bass of album centerpieces “Wọle” (enter in Yoruba) and “Ayilara” (the red light district). Elsewhere, the kick-less afroelectronics of “Verbal Drift” unfolds amid overlapping conversations and a bus conductor’s verbal spin on the neighborhood, while the ambient Lagos techno of “No Counterfeit” (one driver’s declaration of Ojuelegba’s matchlessness) and heady, hyper-detailed dub of “We Die Hia” (an avowal to never abandon Ojuelegba) serve as meditations on the area’s 24-hour accessibility.

“Oju 2.0”, the album’s penultimate and longest track, is a blurry ambient orchestra of multiple neighborhood field recordings combined into a single, sonic landscape – each street scene decaying, reverberating and resounding at a different speed. As a sonic metaphor for order amid chaos, this sentiment echoes in the record’s final interviews on finding a future – Eshu willing – within the anarchy of a neighborhood that never sleeps.