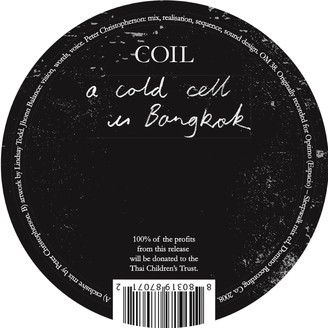 A Cold Cell In Bangkok Coil

In 2008, Domino Records invited Optimo to put together a compilation of music for them to release. I wanted to include Coil’s “A Cold Cell” and after approaching Peter Christopherson for permission to release it he suggested doing an exclusive remix for the compilation. How could I say no? The remix was titled “A Cold Cell In Bangkok”. It was glorious and many Coil fans as well as people who had previously never heard of them fell in love with it after hearing it on the “Sleepwalk” compilation.

Over the years I have received many requests to make this available on vinyl. As Peter Christopherson and Jhonn Balance are no longer with us I felt I was unable to release it without their blessing, but after long consideration have decided to make it available. 100% off all profits made from this release will be donated to the Thai Children’s Trust. In the last years of his life Peter Christoperson had made Thailand his home and fallen in love with the country and its people so I feel he would have approved of this use of funds generated by his music.

“A Cold Cell In Bangkok” will be released on a single sided 12” single with a silk screened image on the other side lovingly designed by Lindsay Todd, the remarkable and acclaimed Scottish artist and runner of the Firecracker, Sacred Summits, Shevchenko and Unthank record labels.

This record is dedicated to the memories of Jhon Balance and Peter Christoperson whose music has brought so much joy and light into my life.