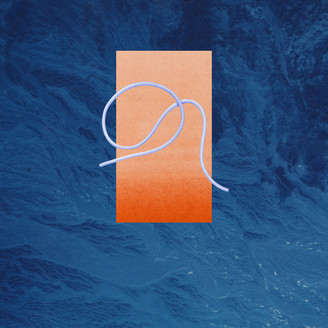 Play All Cassette
Detroit electronic duo South South Million release their first album in 6 years much of which was created using sounds from YouTube, old cassettes and trashed records. If 2012’s breezier “Wind Hand Caught in the Door” played like fractalized (sample-ized?) Beach Boys pop, “Ain’t Lines” embraces their love for GAS, Seefeel and Holger Czukay. Quiet beats play under symphonic atmospheres—while the duo, who sometimes sing—stay quiet. What does “Ain’t Lines” mean? Maybe it’s a record about finding congruence in all of the nonsense? Each of the songs culling from a library of disparate sources and genres to make something that sounds... linear? And the cassette version, as a medium, fits these songs so well. Like a long-lost soundtrack, played on a dusty deck, just as the sun peaks over the horizon. Orange and blue.

It’s hard to tell what’s sampled and what’s not: ocean waves via scratchy sound effects LPs crash over gorgeous string arrangements, cut-up ’70s soul and ’80s dub warble between the left and right channels, saxophone wafts by on the breeze... Chill but not chillwave... - The L Magazine

Swing your door to shut out pedestrian pop, watered-down indie and shallow Top 40, but be sure to allow the winds of a more provocative sonic jigsaw puzzle to catch its ethereal hand at the knob’s teeth. Let it’s bewitching, shifting sounds seep in. - Metro Times