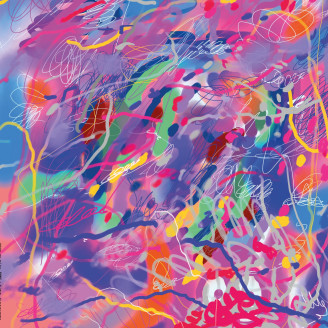 All You Can Tweak Move D, Dman

Around the year 1990, a group of producers gathered regaularly at a space called „Blaues Zimmer“ (Blue Room), located at Bergheimer Strasse, Heidelberg. The Blue Room was the studio of Dirk Mantei aka Dman and David Moufang (Move D) calls it the one of the 'Keimzellen' (seeds) for what would happen in regards to the electronic music movement within the Rhein-Main-Area during the following 10 years. The 90s were roaring, with a lot of mid-sized cities located relatively close to each other- Heidelberg, Mannheim, Ludwigshafen, Darmstadt- and Frankfurt was easily reached. Various highly influential clubs and parties happened around that time and Dirk and David had their parts.

Dirk Mantei & David Moufang, Eric D Clark, Robert Gordon, Nils „Puppetmaster“ Hess, DJ Cle- to name a few- all happen to live in Heidelberg and gather around at Dirks place during this time. Discogs calls Dirk Mantei 'a katalyst figure in the 1990s techno scene of Southern Germany' and this is for a reason. He was running a record store (Dubtools) and threw legendary parties - Planet Bass (Sunday party at Normal, Heidelberg around 1988), Hot Lemonade (Sunday party in Mannheim around 1990). When he moved to Mannheim, Dirk opened the legendary club Milk! (from 1990) out of nothing and later ran another club called HD800 (located in MS Connexion). Both were suited with the same famous - and massive - soundsystem, acquired and tuned by himself. David calls Milk! the birth place of his name Move D as well as Source Records as a label.

Both Davids and Dirks first vinyl release ever was a 12“ they released on Davids Source– called Homeworks 1 – four tracks that were released as one of the first CDs on Source Records a year before. Also "Wired To The Mothership" can be found on this CD compilation, a 32-seconds-long track - and although far too short, it's special. Timeless components weaven together in the most wonderful way - Sheffield-inspired bleeps, timeless pads and detroitish strings, a JXP-3 organ solo, analog drums and a driving analogue bassline- and then it's gone.. When asked, why there wasn't a longer version of the track, David and Dirk said they were not happy with the mixdown back then- so it took them almost 30 years to finally finish a 2021 full version together. Between 2011 and 2021, they both found themselves in Davids Studio from time to time, Dirk was living in Mannheim and some sessions resulted in a bunch of yet unreleased tracks that slept on harddrives ever since then. We are amazingly happy to share these with the world, to let them tell some more yet hidden stories.