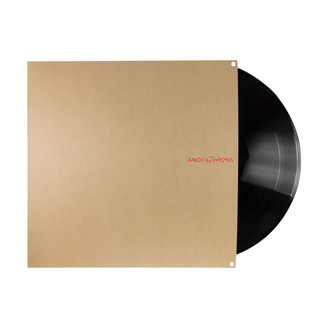 Play All 12"
This limited vinyl-only and single-sided 12" gem of a jam by Tetzlaff, an originally well-kept secret Rico Puestel project from 1995, had it coming for over 20 years now...

The mystical inscription "Angliziskuss" appeared on the original audio tape cassette as well as the magnetic tape that carried several drum machine and bass guitar recordings from the mid and late 1990s until the early 2000s - totally forgotten until they emerged in 2011 when everything slowly started coming together.

"Angliziskuss" is a combination of the German word for "Anglicism" (vocabulary borrowed from English from another language) and "kiss", like one language kisses the other one throughout some kind of symbiotic and overriding act.

That initial naming gave a deeper meaning to the whole development of the production and triggered the gathering of all creative amendments to the track over the years that led to one final and closing addition to it about seven years ago: The dynamic meeting of an infamous, emotionally charged English vocal snippet and its more rational counterpoint German translation, delivering a subtle tension overall and within.

All embedded into one charming housier journey of over 14 minutes, the „Angliziskuss“ establishes an unique recipe of balearic-like piano playings, a disco-and-funk-styled live bass guitar theme, both futuristic and nostalgic synth lines based on one unadulterated 1980s drum machine foundation.