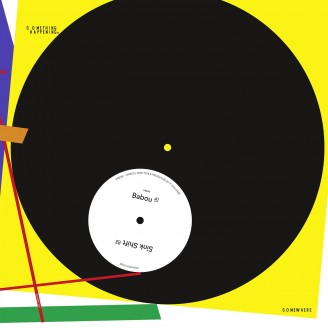 Play All 12"
Inside out, upside down. Even the cover for the newest Something Happening Somewhere has been shaken up. After dealing with UFO incidents in British forests, this time it’s all about investigating relationships within linear structures.

Chaos from order. Crooked lines. Wicked stabs. Presk, hailing from the depths of Amsterdam’s bass and electronica scene, is showing off his guts on this third instalment of Nuno dos Santos’ vinyl fuelled label Something Happening Somewhere. With title track ‘Babou’ setting the mood for the rest of the EP, it’s a telltale sign of how far the talented Presk has come in recent years. Raw music, encapsulated with big basslines and the occasional drop of melody, ‘Babou’ has already put dancefloors on fire and will continue doing so for quite some time.

Continuing on the EP, we’re heading into the land of the dub. ‘Sink Shift’ keeps the groove going but pulls out the melody, focussing instead on tweaked out stabs going in all directions. A track suitable for all kinds of times during all kinds of nights.

It almost seems like a trend: on remix duties this time is another mystery artist. The only thing we know is that he goes by the name of Single Point Edge and that he’s taken the third original of the EP ‘Gomero’ and twisted and turned it into something that sounds like a blend of Four Tet on steroids and some of Presk’s earlier work. Followed by the original ‘Gomero’ it shows what beautiful contrasts can be reached within the context of one EP. Putting more focus on it’s infectious synth riff and big break halfway through the track, ‘Gomero’ proves itself worthy as a perfect closer.

Tied together by the impressive artwork of Children of the Light founder Christopher Gabriel, who took Piet Mondriaan’s work and literally shook things up, Presk’s Babou EP makes for another intriguing pack of tracks released on SoHaSo. A warm, rolling, yet unpredictable tour de force through lines, stripes and circles.