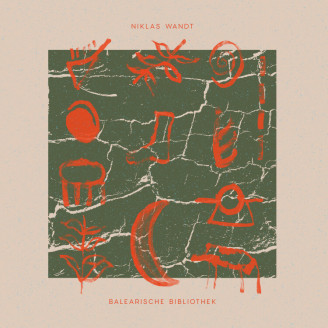 Play All EP
„Balearische Bibliothek“ is NIKLAS WANDT’s first release on ITALIC. An EP with four tracks - and after Erdtöne (Kryptox, 2020) only his second solo release under his own name. He, too, learned at the Düsseldorf Salon Des Amateurs, builds his pieces on American electro and Italian cosmic - in BPM numbers from the lower middle; and where he needs something, he picks it up: fearlessly even with Goa, fusion, radio voice or Krautrock electronics of the so-called Berlin School; only: Wandt sits behind the instruments, if he uses a sample, then on the micro level to build himself an instrument from it. The library is not a labyrinthine collage work, but a supple architecture of impression.

NIKLAS WANDT is no stranger. He is in demand in the younger Rhineland scene, especially as a drummer and percussionist. Most recently, he has released two albums with Jan Schulte/Wolf Müller on Growing Bin and an EP each with Sascha Funke in 2019 and 2020. He has played with Stabil Elite, and is currently working with Neuzeitliche Bodenbeläge and Transport. In addition, he hosts the radio programme Jazz & World for Westdeutscher Rundfunk. Niklas Wandt lives in Berlin today.