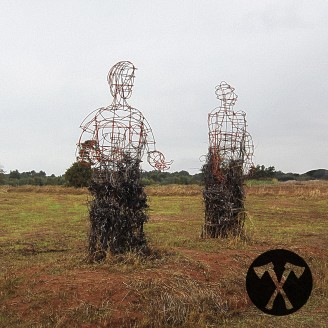 Ballad Of The Ice Red Axes

Play All CD
Red Axes is Niv Arzi and Dori Sadovnik, two young men who have always lived in Tel-Aviv and have been making music together since the noughties. Ballad of the Ice is their debut album. Their artistic travels have taken them from the rock scene to the dancefloors, and to creating an album. More than a summary, this LP is an invitation to discover a singular musical identity: a ballad of the ice, a song as light as love and cold as a tunnel, springy as a dance step and deep as nostalgia.

Originally, the two young men were part of the band Red Cotton. Their musical obsessions were very distinct and have never really left them since: post-punk, new-wave, synth-pop, gothic rock, italo-disco and all the other styles with double-barrelled names that flourished in the underground of the western world at the turn of the 70s and 80s. They were barely born then, and Israel was hardly a promised land for these musical trends. Nonetheless, today the people who love these styles, at the forefront of which Cosmo Vitelli, founder of the label I’m a Cliché who signed them, recognise Red Axes’ talent for creating tracks that are not only impeccably referenced but also terribly current, in their production and in their intentions.

In 2009, house and techno made a noisy entrance into their lives. They were DJs by then and Tel Aviv was all hedonism and crazy parties. Red Cotton was over and Red Axes began. In 2012, I’m a Cliché introduced them into a community of people who enjoyed what the musical press could refer to as ‘cold-rave’. Four EPs were released on the French label that discovered sharp acts such as Yuksek, Azari & III and Simian Mobile Disco. Add to these a bunch of edits that went spinning on everyone’s turntables, remixes and originals that attracted labels such as Kill the JD, Throne of Blood, Correspondant, Clouded Vision, Relish and others – these built Red Axes’ reputation as the makers of solid dancefloor tools. Meanwhile, being resident DJs of the Bootleg in Tel Aviv gave them the ability to play versatile, broaden their scope, improve their way of thinking the music. It also allowed them to rub shoulders with some of their favourite DJs, from Ivan Smagghe and Jennifer Cardini to the Cómeme crew. These established DJs quickly became major supporters.

But Red Axes didn’t get lost in a loop of never-ending clubbing. The extent of their research is evident on the album. Apart from beautiful vocals by Abrão, a member of various Brazilian punk bands of the 80s, Arzi and Sadovnik handled all the instruments and machines. The influence of the types of music they love – which aren’t limited to the ones we just referred to – is inevitably present, but translates in unexpected ways. There’s a lot of maturity in these songs, memories, hashed-out feelings. This music could emanate from much older men; it brings on a certain saudade. But it’s never heavy and doesn’t rely on dusty clichés: Red Axes are very current and love to have fun above all else. They tread on ice with a certain elegance, ice that mustn’t crack or melt.

After ‘Head Like Glass’, a pure cold-wave intro, Red Axes take us on a repetitive stroll of light percussion with ‘Kicks Out of You’. Then comes the rock track ‘Watkins’, followed by a brass dub ‘Only a Clown Can Catch an Axe’. The poignant ‘Papa Sooma’ feels like it’s coming out of an old cassette player, and ‘Road to the Hills’ is all intimate house feelings. ‘Neon’ will make you clap your hands on the stage of an urban western, while ‘Candy’ is a toe-tapping Mancunian devil. ‘Bela Lugosi’s Dead’, a Bauhaus cover, adds a layer of groove in the bat cave, and finally, ‘Dreams Like a Tale’ closes the album in a psychedelic mist.