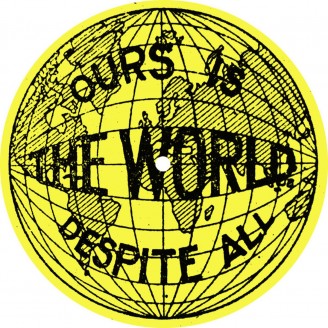 Play All 12"
Golden Teacher started life as a studio collaboration between Glasgow's noise punk trio, Ultimate Thrush and Glasgow's all analogue house duo, Silk Cut. The results of their collaboration turned the ears of all who heard them, not least Twitch who after one listen asked if he could release the project on Optimo Music label.

Recorded live, direct to tape at Glasgow's legendary Green Door studios with minimal overdubbing and editing, the tracks feature various associates of the band contributing vocals and additional percussion. It's a little hard to describe Golden Teacher's sound (always a good thing in our book) but imagine Arthur Russell's Dinosaur L jamming with Bobby O, K Alexi Shelby, Liaisions Dangereuses, Imagination, some voodoo drummers and Sly & Robbie. It is in our opinion one of the most original and wildest records to come out of anywhere in 2012.¬†We like to call it hypno-psych voodoo groove.

The resulting 5 track 12" EP comes in a beautiful hand screen printed sleeve constructed by the band and will be released in this format as a limited edition of 250 copies. Any further pressings will be in a generic Optimo Music sleeve.

Golden Teacher made their live debut at an Optimo night in Glasgow in early October. In future they will be playing select live shows at times and places of their choosing. If you are looking for slick, smooth, generic computer made music, this release probably isn't for you, Sugar