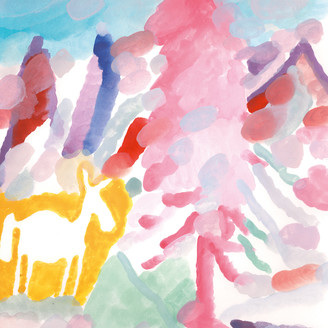 Birds On The Playground Lawrence

Play All LP
it’s happening again: dj, producer and dial records co-owner lawrence produced his fourth album for mule musiq. and once more, another very special one. the berlin-based artist wrote nine new arrangements specifically for “studio mule”, the new audiophile listening bar that mule musiq's head-honcho toshiya kawasaki recently opened in shibuya, tokyo. it features an exquisite vintage hi-fi sound system, a small record shop, craft liquor and beer as well as an extensive natural wine collection. “toshiya's wine and listening bar was the inspiration for the project. i followed the idea of listening to music in this (for me imaginary) place on a magic vintage sound system, slightly drunk with an always special drink in my hand! the music is therefore also very eccentric and “tipsy”, improvised on acoustic instruments, synthesizers and computer, combined with recordings i did in berlin's central tiergarten park.” lawrence acknowledges the imaginative superstructure above his new album and his mode of operating during the recordings. the records is called “birds on the playground” and features deep pulsating music, that unfolds its true absorbing character when the auditor listens care-fully to the detailed storytelling of lawrence. like always his tunes got a special, radiant pulse, that somehow is a signature sign of most of his productions. playful cosmic grooves, light-hearted, crafted with love and yet freshly unset-tling in some moments. his arpeggiated melodies remind partly on the music of hans-joachim roedelius. in other sec-onds they display a jazzy spiritual character and drift into meditative areas, that sound to a degree like long forgotten japanese folk music spheres. as “birds on the playground” isn’t aimed straight for the dancefloor, the overall coating of the music is a relaxed, cautious one, that goes beyond the average definition of ambient music. each track builds up gracefully, in order to present a mesmerizing musical architecture, that offers new sound dimensions with any fresh listening turn. as the record is made for mule musiq`s latest public space enterprise, everyone who is close-ly connected to the label was involved.

mule musiq’s core artist kuniyuki was in charge for the mastering. and the labels visual draw-er stefan marx painted the cover artwork. “when i saw the record cover for the first time, i had to think a bit of an extremely funny new year's eve party from over 10 years ago, when stefan and i founded the imaginary band “the dead sea”. this record would have been a wonderful soundtrack to the bustle during that night.” lawrence reveals.

it must have been a party beyond hysteric spheres, where all guests dance and talk dearly at the bar, while the music slows down their body functions enough to hear a sound that takes everybody away to a place, that must have been home in that very moment.