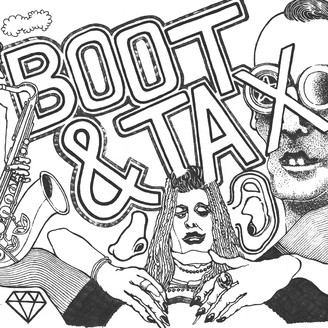 Play All 2xLP
After two sold out 12" EPs on Optimo Trax, Boot & Tax head over to mother label Optimo Music for the release of their debut self-titled, 9-track album.

The Milanese duo are comprised of Cristian Croce (already part of The Barking Dogs) and Claudio Brioschi (Brioski), two of the most popular and respected djs/producers of the Italian scene who share a great passion for analog synths and experimentation, and a deep knowledge of both clubbing and production.

Dance albums are notoriously difficult to pull off and often fall flat but Boot & tax succeed where many fail by making a record that will work on open-minded dance floors but isn't necessarily a dance album. Indeed, my 80-year-old stepmother hasn't danced for years but has been listening to this on repeat all month. Incorporating Claudio's guitar playing, Boot & Tax's trademark eccentric instrumentation along with their analogue arsenal and the occasional vocal from Cristian, they have managed to forge a uniquely characteristic sound world.

Playful, psychedelic, hypnotic, captivating, the album comes in a gatefold sleeve on double vinyl and Boot & Tax will be touring live in support of the record throughout the summer and beyond.