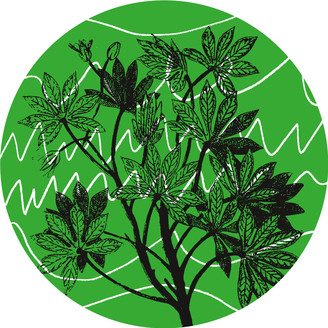 Play All 12"
For Against Fascism Trax 006, Auntie Flo takes us to Brazil, a country that is dealing with having a bona fide fascist president, with an EP recorded in Rio De Janeiro. I’m going to shut up and let Afonso Marcondes from Sao Paolo take it from here -

In a world in which culture policies (incl. music) win nationalist tones, Brazil has lessons to give with the catastrophic failed experience of the last government and the teletubbies talk on Culture from the current one.

As one sometimes feel as if one is on a time-warp from time to time, most often taken there by music, songs like March of The Berimbau here, could easy make for the perfect soundtrack for the political history of Brazil, country in which Auntie Flo got his inspiration and recorded this tracks.

From the military regime that gave Brazil bossa nova in the 60’s, the tropicália sounds of the 70’s to the pop rock era of the 80’s all the way from the rave scene of the 90’s to todays Bahia Bass, music in Brazil has always been instrumental in helping shape the political scene.

One thing about the Brazilian music ’scene’ is that rarely it lends itself to extreme political views, via lyrics or otherwise, after all, carnaval must be kept a happy time! The number of different cultures living in peace, side by side in Brazil has strenghten the country disapproval of hate talk in music since I can remember growing up in the interior of São Paulo state.

As per wiki: Fascism is a form of radical ultranationalism, characterized by dictatorial power, forcible suppression of opposition… Children bedtime reading if you follow the past 15 years in Brazilian politics and the rise and fall of Brazil’s Labour Party, together with its disastrous polices on culture and synergy with de definition above; including the views of a important cultural Party branch that continuously 'preached' that Authors should need no rights over their works. That couldn’t bit music in Brazil.

Fast forward to the first 5 months of government of an unfortunate retired army officer, whose every word sounds like Trump, and whose views on culture is to extinguish the Culture Ministry and cut low the state incentives to the sector, that, so far, is not bitting music in Brasil.

Hope that Auntie Flo’s music inspired everyone as the place where it was made and recorded inspired music in Brazil, as a beacon of light against any hate talk darkness.