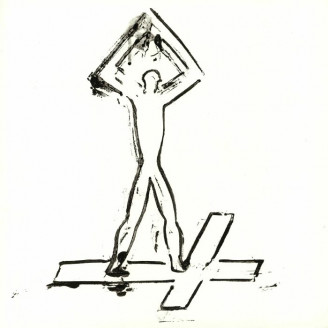 Play All 2xLP
Insanely fresh, killer debut volley by 19 year old “veteran” of Lisbon’s virulent ghetto sound, recorded when he was just 14 and now remastered and released by the mighty Príncipe. It's a brilliantly weirdo, avant-garde fusion of portugese/angolan dance music styles championing an ideal of dance music as punkish & direct rather than overworked and generic.

Hot out of Lisbon’s ghetto sprawl, 19 year old Puto Tito breaks thru on Príncipe with 20 tracks produced when he was barely into his teens, all salvaged from an old Soundcloud account and newly remastered for the dance. The sound of ‘Carregando a Vida Atrás das Costas’ is patently influenced by Tito’s Angolan heritage, and faithfully employs the popular slow Tarraxho and tougher Kuduro rhythm styles. Yet, like the best of Príncipe’s releases, it’s the way he injects a playful, weirdo character and uncompromising, psychedelic vision to his trax that sets Tito’s music apart form the crowd, whilst being very much connected to it.

With a direct fervour and naturally experimental quality to his productions, the album scales from drowsy, red-eyed, to brightly coloured downbeats on one hand, while charging into jagged and nagging uptempo styles on the other hand. But whichever way he goes, it’s always with an off-the-cuff flair and rhythm-lead suss that works the dance to its best.

The 2LP highlights the full spectrum of Puto Tito’s early remit, diving in with the darkside drone and rasping rhythm of ‘Noite Magica’, to swerve from the celebratory, drop-top cruise of ‘Mestre Das Artes’ thru to wickedly screwed Tarraxho in ‘Malucao’ and the deadpan drag of ‘1 2 3’, while he can hardly suppress his brilliant, weirdo tendencies in the zig-zagging arps of ‘C L Prod’, the heat-warped funk of ‘OIHo JoOnAe’, and the heatsick, syrupy pressure of ‘Locura Tutal’. Further, the digital bonuses extend the wigged-out fun in seven short, sharp shots, slipping farther down the rabbit hole into a bittersweet beatless flex on ‘Melodia daquelas’ alongside the hypnotic uptempo styles of ‘ABuzaNtesS’.

Tito’s arguably and understandably naif approach speaks to an ideal of dance music as punkish, fresh and direct, rather than overworked and generic. It’s an approach that, in the past, has yielded some of the finest underground music, from the UK’s early ‘90s hardcore and jungle, to South Africa’s Gqom scene, Chicagoan footwork and the Singeli sound of Dar-Es-Salaam. More specifically, its possible to place Puto Tito in the same dare-to-be-different, bedroom producer category of grimy Kuduro, Batida and Afrohouse as young heroes Nídia or P.Adrix, as ‘Carregando a Vida Atrás das Costas’ vividly demonstrates.