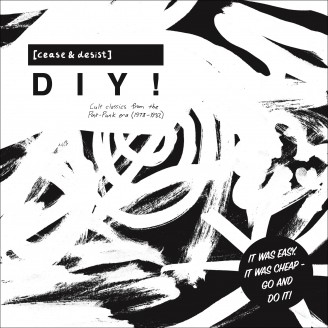 This is a compilation of 16 UK 7" singles recorded between 1978 and 1982, compiled by JD Twitch, that showcases the DIY spirit of those times.

"If Punk was the nuclear detonation, the fallout that came after was where a lot of the most interesting music of that era was made. People who would never have thought to release a record before realised it was something they could do, and the end result was a DIY explosion. I've always loved music that doesn't try to fit in a particular genre, that is anti-canonical and doesn't care what else is going on in music at that time, that takes risks and is full of imagination and ideas that may or may not make any logical sense but that resulted in something unique, that ignores conventions about how a record SHOULD be produced and that was created simply because its creators felt the urge to express themselves and share the results with some other people. This compilation compiles 16 tracks that fulfil all those criteria. None of them had any success, most are (unjustly) obscure but every one of them has inspired me and would be in my ultimate 7" singles box." – JD Twitch.

This release has been a real labour of love involving tracing long-lost artists to far-flung corners of the globe, persuading them that the modern world needs to hear the music they made several decades ago, tracking down lost masters, lovingly restoring 7"s in the case of those where the masters were lost and then conceiving an elaborate package with detailed sleeve notes to house the double album package. Unfortunately, the original choice of title for this release infringed on the copyright of a series of well- known pop compilations released by a certain major label. They sent a cease and desist (hence the title of this edition) which meant the original package could not be sold. I tried to find a workaround so that the original sleeves could be modified and then put on sale, but my suggestions to the certain major label were either not acceptable or too expensive to implement. Thus, this edition is released in a more conventional package than was intended.

The 2 x LP vinyl edition comes in a gatefold sleeve with printed inner sleeves containing sleeve notes and detailed overviews of each individual track by JD Twitch, and an introduction by New York's DIY expert Dan Selzer.
This is a compilation of 16 UK 7" singles recorded between 1978 and 1982, compiled by JD Twitch, that showcases the DIY spirit of those times. The 2 x LP vinyl edition comes in a super deluxe package combining a double-sided black and white four x 12" panel sleeve, hand-folded into an LP sleeve with a colour insert containing colour photos of all the sleeves all inserted in a bespoke pvc wallet.