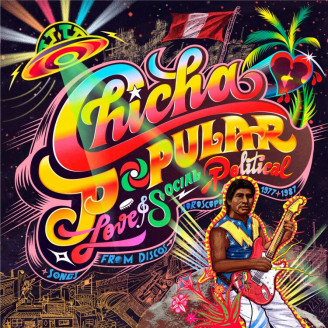 Play All 2xLP+DL
This compilation brings together 24 iconic songs from that era, with a focus on the theme of love songs (A + B side) as well as social political songs (C + D side), highlighting the emotions that this music brought to the popular working classes of Lima, nationwide and the diaspora. More than 30 years later, these songs continue to resonate like the mirror of a country that was reborn but this time is looking at itself and its own identity.

From the mid-1960s onwards, there was a unique moment of fusions in Peruvian culture brought about by Andean migration from the countryside to the city which gave rise to adaptations and intercultural mixing. The culture and music they brought created the powerful genre of Andean tropical cumbia, via electric instruments and arrangements along with modern, popular pop sounds, creating a legacy that is alive to this day. Musical revolutions are often born from the people. Peruvian “chicha” cumbia is the music born in the "barrios bajos” (slums), alleys, hills and the peripheries of Lima on the coast and cities on the edge of the Andes mountains in the late 70’s and 80’s. The true new Peruvian sound was not played with folk instruments but with guitars and timbales. In the 60’s and 70’s Peruvian tropical music was characterized by psychedelic hybridity and instrumentals for mass delight, by the mid-70s the appearance of a "class consciousness" and therefore a subaltern narrative. “Chicha” is perhaps the genre that has most emphasized its pride in being proletariat, itinerant, provincial and hardworking.

Founded in Lima by Juan Campos Muñoz, a businessman, dreamer, and also a lover of music, Discos Horóscopo was a label company on the margins of the official Peruvian music industry. Learning the ins and outs of capitalism in the 80’s was hard because it was the decade where the wildest neoliberal policies and the most extreme Maoist sendero luminosa revolt began simultaneously. On Juan Campos’s end, it was the moment to initiate this new venture of Chicha music, which would allow Chicha to emerge symbolically (and then economically) to a new social class composed mostly of migrants, landless peasants, and proletarians without a factory.

Between 1977 and 1987, the Discos Horóscopo label produced the largest wave of Andean tropical cumbia in the world; Chicha, a reference to the fermented alcoholic drink from the Andes. The label was filled with contemporary icons such as Chacalón y La Nueva Crema, Los Shapis, Pintura Roja, Los Ovnis, Grupo Alegría and other groups which today still have a cult status in Peru and beyond. Together they created a unique style with the capacity to talk about both love and uprooting, unemployment, struggle of classes, internal violence and impossible loves.