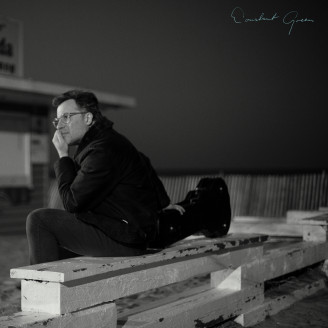 Play All LP+DL
Zelienople frontman Matt Christensen returns to Miasmah with Constant Green - a record of reverberant country inspired songs that puts the weight somewhere between Johnny Cash and Slowdive. Matt pours out his soul through flashes of life - small and large. His voice roaming over the guitars in a way which feels like a floating poetic deluge.

Appearing fresh from last years Zelienople album Hold You Up, Matt has made a very personal record that arrives as perfectly as it could be. It is full of beautiful sparse moments that capture the feeling of time standing still while simultaneously flashing in front of your eyes. As a child of the 70ies, growing up with country influenced AM rock on the radio, riding around in cars without seatbelts, Matt creates this nostalgic feeling of free riding through the city streets at dusk : a dream world where one can see green as a symbol for humanity and optimism. Not to say the album doesn't have it's share of darkness. Christensen always lingers deep in melancholy, driving his fears and anxieties out through music.

Visions of being able to move anywhere, picking his mother up from jail, family matters, change, the small things in life - all outtakes from what he sings about. Although it's hard to pick up on unless you really listen, as his ramblings can at one moment be fully clear while in the next drowned or muffled - becoming a mere meditative element to the music. Steady collaborators Brian Harding and Eric Eleazer from Zelienople accompanies on pedal steel and keys to further fill the sound into a warm dream, following in the footsteps of Matt's previous Miasmah album Honeymoons (2016). That said, while Honeymoons used drum machines and vast open spaces, Constant Green is another step closer towards the classic singer-songwriter folklore. Timeless gold from an artist that never stops creating.