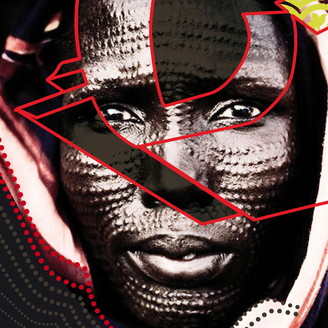 Play All 12"
Daniele Baldelli producer now has nothing to envy to the Daniele Baldelli DJ. This is demonstrated by the authoritativeness of the first two 12” of six of the series "Cosmic Temple” on Mondo Groove label. What strikes the eye are the covers, with fluorescent colors, which will form a patchwork created by Aldo Drudi (the designer of Valentino Rossi), a large mosaic that interprets garish aesthetics/logo Cosmic. But immediately then the music takes the stage, 3 tracks in "Chapter 1" and 3 tracks in "Chapter 2", able to tell the true mood of the imaginary Baldelli’s sound and take them to a land of wonders.

Chapter 4: An ingredient that can not miss in Baldelli Cosmic project is Afro-beat: "Joka Joka", sung by congolese Bale Mondonga. "Vhanessa" is a magical flight in search of distant galaxies, a tribal electro joints game a kind of Rubik's cube. The Kraftwerk-ian "Archetipo" leaves us waiting for the arrival of the chapter 5 and 6 to complete this Cosmic Temple, to listen to and to watch the puzzle of 6 covers