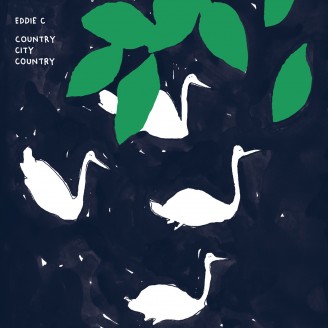 Play All 2xLP
If you ask the Canadian producer and DJ Edward Currelly aka Eddie C to name you some things he haven't done yet but always wanted he answers: „Visit Greenland.  Sell 45s off the back of my motorcycle in Jamaica.“ Those who know the music of the former countryman that left the Canadian nature to get inspired by the lively culture jungle of Berlin get a winking smile on their lips.

Because those who know his music know that the answer is not only a dream - it is also a dreamy picture of the essence of his music: laid-back, deep, and heartfelt dedication - thats what his sound is about - like chilling out on the seat of your Yamaha CB 200 while selling stress-free vinyls of old reggae anthems under the clear blue Caribbean sky.

His second album „Country City Country“ is full of such a vibes. But not obvious and this at least because there is not much reggae to be found. Only in his dubbed out album opener „To Each Their Own“ you can hear the echoes of Jamaica cleary. Then his record passes away into some cool hiphop instrumentals full of haunting samples that easily loop in your head.

Already here you are bewitched by Eddie C’s gifted hand for playful musicality that goes far beyond the average concept of a track. His hiphop leaves the usual soul loop map behind while diving into some cosmic zones full of melting melodies.

With the fifth track „Drinkin and Thinkin“ the man that releases his delicate crafted music since 2009 on labels such as 7 Inches Of Love, Endless Flight, Karat Records, or his own imprint Red Motorbike starts to drop a more demanding danceable funk. From then on style does’nt matter and Eddie C let his musical love affairs free wheeling: West-Coast-Rock, Balearic, Funk, Cosmic, Boogie, House, string-laden Disco deepness – you name it.

“I hope a small bit of my musical interests come across.“ he explains about the diversity of styles which are hold together by a unique funkyness that is hard to resist. When Eddie C was a child he played piano, violin and guitar.  At highschool he played in multiple bands of many different styles.

In the early 90s he went to the great Techno parties in Toronto and Detroit and danced the night away. Later in the decade he had his own radio show for 4 years. In all that time he been a passionate record collector and he always wrote music that is filled with his knowledge about it.

That is why „Country City Country“ jumps airy and laid-back from jazz to house, from dry jacking rhythms to cool rolling bass grooves, from wild clapping drum beats to playful uplifting brasil piano house madness. Always with melodies above and in the bassline. The inspiration behind his new album is to share more music Eddie C reveals. And this not with a look on the dancefloor in the first place.

“I don't really write music with the thought of using it in a DJ set later“ he says. Instead he writes music that listens to his heart in order to reach the heart of the listener. It is all produced on really cheap and affordable stuff with reaching the maximum out of it. What Eddie C found in all of his machines is a funk that hits the fan wherever he is: in the deserted Canadian mountains, the green Jamaican hills, or in the moving sunday afternoon Berghain wilderness.