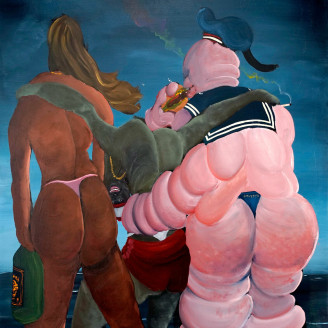 Play All 2xLP+DL
‘Cry Sugar’ is Hudson Mohawke’s third album and deepens his practice of producing motivational music for club goers—uplifting the debauchery and inspiring many through his own brand of anthemic maximalism.

Trading in his lineage in dark UK back-alleys filled with Glaswegian antipathy for studio sessions with blazed Pavarotti-inspired tenors and drunk string quartets, Mohawke has dialed in an ongoing fascination with melding high and low culture. After all, he is indeed the architect for the high peaks of high-definition trap production that became embellished in the 2010s—a style that has been appropriated in everything from beer can littered college parties to Arbys commercials. Instead of sneering at the “red solo cup” nihilism of his legacy, Mohawke seems to relish in the uncanny freedom such depravity affords.

American decadence, then, becomes a stage for his music to thrive—where the DJ booth becomes a composer’s podium for him to conduct the tense drama between debauchery and apocalypse, the “mise-en-scene” of club culture in 2022.