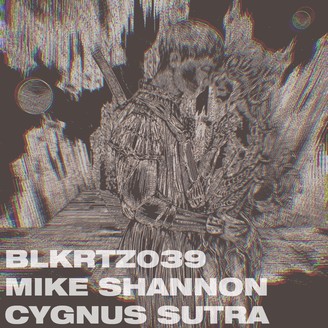 Play All Digital Album
BLKRTZ is please to announce the release of Mike Shannon's first solo album in 12 years, Cygnus Sutra. Initially conceived as a sound track to a Fantasy/Sci-fi epic not yet written, the album sees Shannon exploring some of the deepest, most contemplative musical canyons of his career, borrowing liberally from muted jazz, golden age ambient, cinematic exotica, and classic kung fu flick scores in equal measure to spellbinding effect. Featuring additional string arrangements from Godspeed You Black Emperor's Sophie Trudeau, Cygnus Sutra is by all accounts a personal magnum opus, and an intimate glimpse into the inner musings of one of Canada's most distinguished electronic music ambassadors.

Asked about the album's impact label head Scott Monteith aka Deadbeat had the following to say:

“There are a handful of people within the electronic music scene who occupy these unique positions of being both quietly background, and at the same time utterly essential, bar raising, and era defining. They're like pillars which are essential to the temple's structure but hidden unless you go looking for them. I would consider people like the late great Mike Huckaby in Detroit, the late great Andrew Weatherhall in London, and Zip from Perlon in Berlin as great examples of this sentiment, and from a Canadian perspective Mike certainly holds a similar position. These are all people who have forwarded the work of their friends and family and the community at large above any idea of personal reward. They have also all kept their solo outings musically to a minimum and as such when they do allow us a brief glimpse into their most personal musical reflections, it is a true gift and cause for celebration. This album is without a doubt one of those rare moments and it gives me enormous pride to be able to share it with the wider world.”