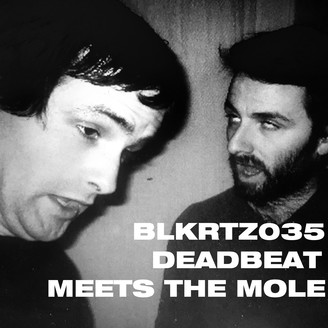 Play All 2xLP
Canadian Berlin based producers Scott Monteith aka Deadbeat and Colin de la Plante aka the Mole are please to announce the release of their debut collaborative album, simply titled Deadbeat meets the Mole.

While the two have performed and toured extensively together over the years particularly via their shared association with the Mutek festival and the Cynosure and Wagon Repair labels, this is the first time they've worked in the studio as a duo.

Composed over the lock down period in Berlin, the album's ten tracks traverse the full range of their shared bonkers musical interests, taking in low slung house, dub, hip hop, and smoked out sound collages. When asked about the albums motivations they had this to say:

“I guess Capital H Hosers is a badge we could both wear pretty honestly. Perpetual tweakers of knobs and pushers of buttons both literal and personal might be another. Stay at home dads. Tellers of untold incredibly bad jokes. Yet miraculously, some 20 years on, still somehow on the same weird page, and counting our lucky stars for all you kind folks who still care to listen. We finally got around to making an album during this little unscheduled vacation from normal life, and we hope you'll have as much fun listening to it as we did making the stuff.”