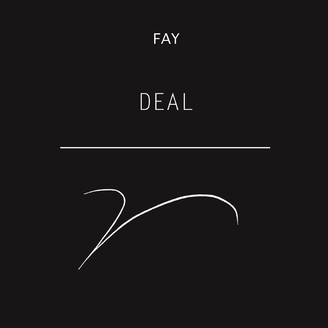 Play All LP
Forging an idiosyncratic musical language, told through striking rhythms and adventurous wordless vocal explorations, 'Deal' is FAY's boldest work yet, moving further away from the pop signifiers of previous exploits. With an articulate minimalism, 'Deal' flexes and shapes these elements to their maximum potential through vast spacial movements that evolve down unexpected paths. Compositional directions diverge through variations on a theme. The album's complex choral arrangements and daring structural ideas demonstrate a deft understanding of music foundation while departing into abstract possibilities outside of these standards.

A conversational interplay between drum and voice is at the center, highlighting an alluring human element. A loose, primal urgency guides these compelling and playful electronic compositions that favor intuitive sense perceptions over self-expression. The voice acts as a beacon throughout the record, leading the rhythms and arrangements towards their next move. 'Deal' is music for movement, an active listening experience that feels narrative or visual, building tension and anticipation of where the piece will lead, and what will happen next. The album uses sparseness to it's strength, with each note and drum hit sounding more potent and unexpected. With a willingness to embrace the potential for new music, 'Deal' is a brave and different record that will reward listeners.