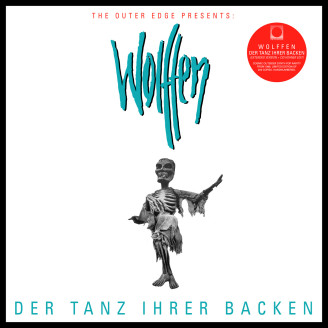 Here's another goodie from The Outer Edge! This time we're presenting a very limited pressing of the cosmic outsider synth pop tune "Der Tanz ihrer Backen" by Wolffen. With a haunting mid-tempo drum machine pattern, a deep bass, and vocals in German, the track is already absolutely unique. But what will blow you away is when the mysterious Middle Eastern synth theme gets topped with a catchy chorus sung in the Arabic language!

Wolffen (or sometimes called Koppelberg's Wolffen) was a project based around actor and singer Thomas Koppelberg. Born in 1957, Koppelberg unfortunately died at the young age of 41. The track originally appears on the album "Wie zwei schöne Tiere" (translates to "Like two beautiful animals") which was completely produced by composer and keyboardist Peter Schnell and released privately in 1988. The LP remained completely forgotten until it was rediscovered by label owner DJ Scientist and was made public via the label's internet shop a few years ago. It didn't take long until this very special tune spread via social media and became an insider tip in record collecting circles.

"Der Tanz ihrer Backen" (translates to "The dance of her cheeks") is now available for the first time as an extended mix on a loud 12" disc. Side B offers a mostly instrumental edit by Cid Hohner (of OTTO) which leaves out the German verses but keeps the haunting Arabic chorus.

Only 200 copies have been made - all are numbered and come with a handmade picture sleeve plus additional Japanese Katta sleeve and sticker. Don't sleep on this rare gem!