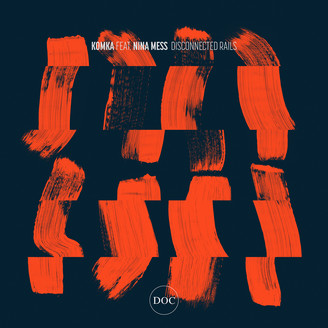 For almost two decades, the Brasilia based artist has been an active name and personality in the electronic music scene. Multi-talent, very respected DJ and producer, João Komka managed a career with diverse perspectives guided by independent initiatives. His Influences ranges from disco to industrial. Komka’s live performances are recognized as unique with an overwhelming selection of electro, techno and house beats, exploring deep melodies, acid sounds, and consistent grooves.

Track 1: DISCONNECTED RAILS feat. Nina Mess is full of broken beats, a collision of new wave and techno that could most likely fit in any electro anthems selection. The artist used TR-808 drums, Moog Sub37 synths and lots of layers made with Serum, which is one of Komka’s favorite virtual synths.

Track 2: GUARDIAN POETS is a combination of synths and a Moog Sub37 to create a dance floor killer. Synthpop with 80s vibe with a techno texture at 110BPM. On vocals, Komka used a Sylenth as a vocoder that reminds Vitalic. “This song opened the door for some tricks I use today, says Komka”. One will probably refer to Front 242 sounds, and that’s what we love about it too.

Komka’s music have been acclaimed by such artists like Laurent Garnier, Boys Noize, and Zombie Nation. Highlights for "Take Control" from Come and Hell (his side project with Mariana Perrelli), was chosen by Gui Boratto to compose his third album Abaporu. Come and Hell is also featured in the compilation Magnum Vol. 1 (DOC 011). One of the creators of 5uinto and the club’s artistic curator responsible for many significant international names that played there under his line ups and direction such as Solomun, Miss Kittin, Stephan Bodzin, Anthony Rother, Boris Brejcha, Dubfire, Ellen Allien, Michael Mayer, Steve Bug, Gui Boratto, Oliver Huntemann and DJ Hell to name a few. A type of work that definitely shaped Komka’s electronic world.

Komka is a Brazilian soldier with an arsenal of ideas, and talent with serious productions under his belt to conquer the undergrounds and festivals beyond the borders.

Embracing a new phase, Disconnected Rails EP will get into your head and stay there. Get ready to dive deep and lose your sense of reality.