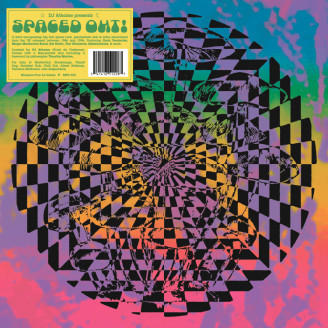 Play All 2xLP
Musique Pour La Danse is proud to present SPACED OUT!, a compilation curated by Belgian artist and producer DJ Athome (Front de Cadeaux) which focuses on psychedelic dub, space rock, and early electronica created in the UK's festival scene between 1986 and 1996, the result of a life long passion and 30 years of following artists from the festival scene.

It was a loosely organized British musical movement born in the early 80s and focused on free festivals in Stonehenge and other countercultural sites across the country. It represented a continuation of the psychedelic spirit of the 60s, with altered states of consciousness, dub production techniques, non-Western influences as well as instruments featuring heavily, along with a desire to side-step mainstream venues, labels, and attitudes.

Musically, it took on many forms, from mind-expanding space rock to third eye-opening electronica to shattering psychedelic dub. Visually, the zines, cassettes, LPs, and CDs created by this scene also displayed heavy influences from 60's psychedelia, updated for the late 80s and early 90s.

In the 90s, the zines and cassettes reached the eyes and ears of DJ Athome, then a young DJ living in Liège. After meeting a group of like-minded individuals organizing local gigs which was single-handedly responsible for putting Liège on the map for many British bands, he dived headfirst into the sights and the sounds of this festival scene, gathering as many albums as possible and joining local collectives involved in the organization of events.

This compilation is in equal amounts an introduction for newcomers and a confirmation for those who already know that this was without a doubt one of the trippiest and most compelling psychedelic musical movements of the last decades, notable for its hybridity, its sincerity, and above all its wonderfully life-changing effects for listeners and performers alike.

The compilation is presented in 2LP format, along with a limited edition Riso printed scene which features a foreword by acclaimed philosopher Timothy Morton, along with liner notes by David Borsu, one of the key players of Liège's musical collectives in the 90s and illustrations by designer Andrew Beltran.