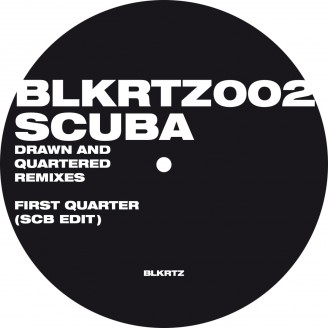 Play All 12"
Having launched BLKRTZ to wide spread critical acclaim with his album Drawn and Quartered in June this year, Deadbeat now enlist the aid of two fellow Berlin residents who need no introduction for remix duties.

Working with the source material from the First Quarter, Scuba dons his SCB guise and turns in a slow burning sci-fi techno monster sure to appeal to fans of Monolake and his own early work. Rife with reverb drenched sonar pings and mechanized groans in the periphery, the track lurches toward it’s epic crescendo like an alien infested star ship Nostromo sliding slowly to it’s demise into the center of a black hole.

Bringing things back up into the light on the flip, Efdemin tranforms the Fourth Quarter (Cala’s House) into a chugging deep pocket house journey. Riding the cusp of a rubbery bassline and molding the chords into a timeless house organ motif, the original’s dubwise leanings are heard loud and clear through a cloud of crackling unintelligible vocal samples and thunderous spring reverb crashes worthy of king tubby himself.

Without a doubt two floor ready reinterpretations and a great sign of things to come from Deadbeat’s new curatorial venture.