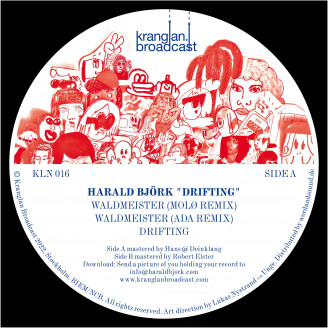 Play All 12"
In May 2020 Cocoon Recordings released the third album of Harald Björk. With the club scene on Covid-hold , tours canceled and all of our favorite DJ’s locked up at home… not the optimal conditions to release an album on a nr.1 world wide club empire as Cocoon. How ever we decided not to let a virus kill our beloved culture, as Mr. Sven Väth put it „I would like to share with you the album of Harald Björk… which has soothed me and I hope will also give you a soundtrack for these uneasy days“. It felt right to release it.

The release was shrinked from a thought of vinyl box to a digital release with future plans on vinyl. However covid decided to stay and time went. The queue at the vinyl factories didn’t make the process easier… But at one point the dream factory of Kranglan Broadcast decided, enough! , the world has to keep on dreaming. And what is a better way to embrace dreams then to release a vinyl full of of dreamers, groundbreaking in their corners of the electronic umberella. Dreamers doing their thing not even looking at the norm or what’s the recent hype.

Aditional info: Houndtooth finest Throwing Snow who Harald met in New York 2013 during their term at RBMA brings a bassdriven rollercoaster with the arpeggios from Spektrum bouncing like rubberballs through an impressive broken drum work. The remix came delivered with a text saying „I like my drums slamming“ and so do we.

Ada takes the eteric pads of Waldmeister and place them in a auditive dreamstate, an emotional hybrid of space and vacuum. Large feelings, yet so close. It builds, stretches and builds until we are shown the enlighted truth in the end of the tunnel. Harald is a long time fan and colector of Adas music which he got to know through the lovely label of Areal and has continued to love through the Pampa era. First remix from Ada on Kranglan was the epic remake of Sabor Latino, Sabor de Ada! We are delighted to have her art on the label once again.

The pandemic 2020 took away the most fun of beeing in the club scene, sharing stages with brilliant interesting dreamers showing and exchanging visions performing music. Under these strange conditions Molø and Harald ended up sharing a physical stage at the stream festival United We Stream. One thing led to the other and Harald took a deep dive in to Molø‘s great melodic techno universe. Some times you find gold in your own hometown. Molø’s take on Waldmeister build on the mellow arpeggio from the original track and brings them to a perfect chilled out afterhours. Imagine watching the sunrise to this beauty.

Swedes are a people of high integracy but as loyal citizens we allways attend formal events by the state. Skudge and Harald met at the Swedish National Radio price anouncement, both nominated for „electronic act of the year 2011“. It was an akward event with radio interviews and canapés, not very techno, the signum of Skudge. How ever Skudge won it all leaving both Avicii and Swedish House Mafia empty handed. Landberg, the swing king of Skudge is the kind of person that will tell you why the TR-909 has to be master clock to get the right groove in a techno performance, if you ask… which you do ??! If you’re looking for techno with groove look no further, Skudge is king! In his take on Walking Path he display the power of minimalistic dirty grooves, a 909 and a 303 what else do we need?

Kranglan Broadcast is overwhelmed and proud to give you Drifting, yet another release bringing dreamers together releasing techno vinyl <3