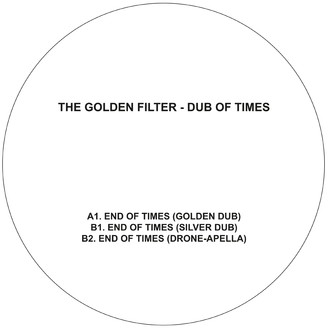 Dub of Times The Golden Filter

Play All 12"
Optimo Music don’t generally do limited edition releases but when The Golden Filter did these extra mixes of “End Of Times”, the A1 track off their recent EP we thought they were too good to remain in the digital domain so have pressed up a small run of 12” singles aimed specifically at DJs.

The original single version is a future synth classic. These new dub versions take it to the dancefloor and have been tried and tested around the world over the last few months. They are considerably extended, dubbed out and add extra dynamics & ecstatic synth power with hints of the original vocal. There is a slo mo version at 103 bpm and a faster version at 118bpm which means the track should work any time from warm up to peak set. There is also a Drone-Apella version included too.