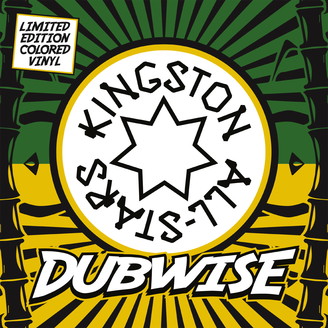 Play All LP Coloured, Limited Edition
The foundation of this dub album was created by some of the finest sessions musicians ever to grace the studios of 1960’s & 70’s Jamaica. Their instruments were the cornerstone to countless Dub LP’s that began to surface in the early 70’s and continued on into the 80’s creating a whole new genre of music. As they did back in the early days of dub, the Kingston All Stars gathered together in Kingston, Jamaica at Mixing Lab Studios and laid down a series of riddims that would lay the groundwork for what comes next: the singers. Both Greenwich Farm rasta, Prince Alla, and falsetto, Cedric Myton of the The Congos, contribute vocals to the album but half of the riddims on this LP are, to date, unreleased, and have yet to be voiced. In essence, this album is a sneak peak into upcoming releases.

The style of riddims that were created during these sessions range from the Cumbia influenced “Reyes Dub” to the Ethiopian Jazz flavored “ Kebra Dub ” that pays tribute to the African sound system, Kebra Ethiopia Sound and shows the wide variety of influences that fuel these musicians. Tracks like “ Dub Ova ” combine Ansel Collins keyboard work with Hux Brown’s infectious grooves to create a funky rhythm that you have not heard the last of. “Clappers " features Sly Dunbar’s big drums and another Hux groove creating a classic skanking dub reminiscent of rhythms by The Revolutionaries band.

As with all good Dub albums, the tension and release as instruments are brought in and out of the mix are felt as they much as they are heard. The negative space left by dropping the bass is then filled with a horn line or guitar lick soaked in echo or reverb giving tracks a second life. The album, mixed in Montreal by producer & engineer Mossman, who is no stranger to engineering dub, has become a worldwide collaboration and is a harbinger of big things to come from the Kingston All Stars!

The Kingston All Stars are Sly Dunbar, Ansel Collins, Mikey “Mao” Chung, Linford “Hux” Brown, Jackie Jackson, Robbie Lyn, Everton & Everald Gayle. Under the artistic direction of Moss “ Mossman “ Raxlen, a multi-faceted musician, producer, engineer and writer, the KAS will be releasing new recordings as well as performing live shows internationally. These are the musicians and session men who recorded at a variety of Jamaica’s legendary studios, and created so many of the classic rhythms from the 1960’s and ‘70’s – a countless number which have since become staples in a wide variety of today’s musical genres from hip hop to dancehall to dubstep and techno. In various incarnations, members of the group have been part of or recorded with Bob Marley’s Wailers Band, Studio One’s Sound Dimension and Soul Vendors Band, Lee “Scratch” Perry’s Upsetters, Peter Tosh’s Word Sound and Power Band, Toots and the Maytals, Now Generation and many more.