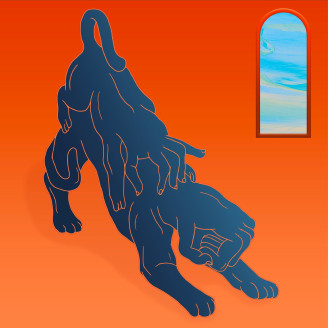 Play All 2xLP
Creative offspring of Tushen Rai and Cornelius Doctor’s musical fantasies, Hard Fist has been a non-profit project encompassing producers, graphic designers, djs and dreamy party worshippers since its inception in 2017.

“We would never have thought that this collective story would bring us this far, that it would take such a place in our lives and that it would bring us so many beautiful encounters. It was only possible to celebrate our 5th anniversary with the unreasonable idea of making something out of the ordinary.

So we thought big, a digger’s dream: a double vinyl in limited edition with 20 artists from 17 countries gathered around exceptional collaborations: producers who have marked the history of the label these last 5 years, friends, but also peers, people who inspired us and gave us the desire to create Hard Fist.

In this Unidentified Noisy Object (U.N.O), you can expect borderless music flirting with Nu-Rave and No Wave, Cosmic Dub and Post-Punk, a slice of Psychedelic Electronica, a lot of Acid and a bit of Slow Goa Trance. As well as some beats of Krautrock played with an Afrobeat groove and a few Darkwave’s synths. But not only that. It’s never only that. But what is it then? Just a label without label, to dance and to explore.”