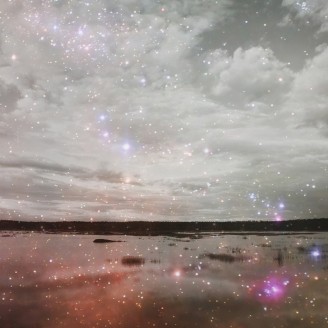 Play All 12"
Not much is known about Lithuania’s Corbie besides that he’s classically trained, composes music for children’s theater productions, and avoids plug-ins and samples. He solicited Nuearth Kitchen with demos and impressed us enough to merit a 12-inch single containing two tracks remixed from his unreleased e.motion.s album by two of the world’s most slyly subversive house producers: DJ Sprinkles (Terre Thaemlitz) and Juju & Jordash.

The original “Arktika” is a fantasia of lush, romantic synth washes and suavely understated beats that could’ve come off Roxy Music’s Avalon. The tone is richly decadent. “Sprinkles’ Deeperama” reconfigures it into an even more libidinous and elegant tribal-house excursion. This version repeatedly thrusts itself into your mind and musculature with earthy yet debonair insistence. The track’s effervescence never falters over its 12 minutes.

Corbie’s original “Movement” carries a widescreen gravitas and the sort of brisk, solidly hit frame-drum beats that imply important travel over natural terrain. Exotic string and wind instruments commingle majestically in a manner that will sound familiar to anyone who’s seen a Hollywood film set in a country where English isn’t the first language. Juju & Jordash, as is their wont, supersize the beats and put a strange spring in their step, and then introduce an ominous, tensile bass line and imminent-doom synth atmospheres. The Amsterdam-based duo have ushered Corbie’s winsome composition to the dark side, where it breathes with an entirely new vigor.